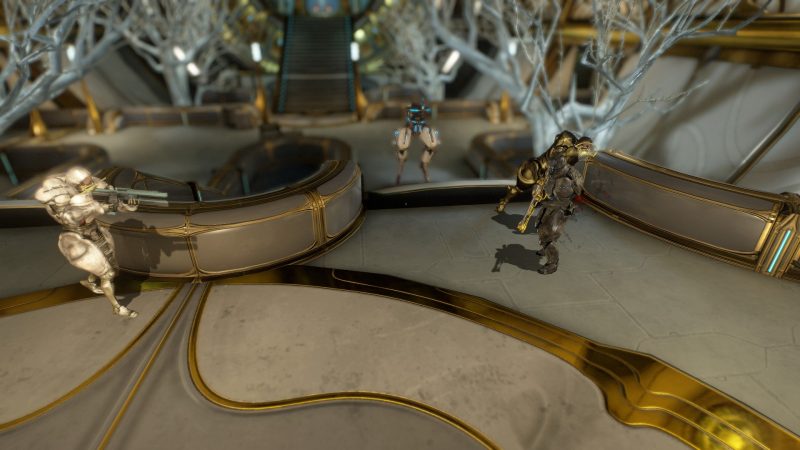 Especially if you’re new to the game it often feels somewhat overwhelming to choose which Warframe you should go for next.

To be honest, in the end you can’t really go wrong with picking up any Warframe that comes along your way, because almost all frames are viable and great.

That said, there are a few that will help you out during the early game and can often be used during the end game as well.

Our Top 5 is focused on helping you survive and dealing lots of damage, which will reduce the time needed to fight your way through the star system and the missions to come.

Don’t forget that individual play style is also fairly important, so try out all the Warframe you can get your hands on and find those that suit your personal style the most.

You can also always use the primed version of each Warframe if you can get your hands on those!

For most players, Rhino is the first new Warframe they will craft. The reason is fairly simple: The Jackal on Fossa (Venus) is the first assassination target you will encounter in the game, so it is only logical to farm Rhino during the early stages of the game.

Even though you get the heavily armored Warframe fairly easy, he is by no means a bad Warframe during the mid and late game.

While you will probably build him as a tank during the earlier stages (especially in combination with his Iron Skin ability), later on you can either build him as a buffer (using his Roar ability) or even as a damage dealer with huge area-of-effect damage with his Rhino Stomp.

However, the main reason why Rhino is on top of our list is because of his high tank abilities, making him a great Warframe for close combat as well as a front line frame in any group.

You can capture your capture target, hack consoles, or fight tougher enemies without thinking about incoming damage.

Since there are no real prerequisites to farm him, you should start working on Rhino as soon as possible.

The Warframe itself got a few reworks during her time in the game, but nowadays she shines with great area-of-effect capabilities as well as some tankyness, making her a great combination of DPS and survivability.

Even without the corrupted mods from the vault you’ll easily deal a lot of damage.

The main reason why you want to get Ember after you’ve obtained Rhino is fairly simple: While Rhino is great in a lot of different game modes, dealing with huge mob groups isn’t really his strength.

Ember is way better to help you fight through defense, mobile defense, survival runs or deal with interceptions.

Endless modes require you to deal with more and more enemies, so Ember is a great first pick in those circumstances.

#3 Khora – The Mistress of Entrapment

Khora is the only Warframe on our Top 5 list that can’t be farmed by simply making your way through the star chart. Instead you will have to work on some lore quest lines first, completing ‘The New Strange’ before you can gain access to Sanctuary Onslaught.

We also need to warn you that this will be probably the first time you’re going to have a lot of grinding to do, so don’t get too frustrated – and start doing other missions if you feel burned out by farming for her.

The reason why Khora made it onto this list is because of her great skill set: She offers damage, heal and one of the best crowd control mechanics in the game, which will be super useful during the earlier stages.

Once you start to max out your mods, get your hands on some of the corrupted mods and can actually build for endgame farming, Khora will be one of the best Warframes in the game.

Oh, and she also allows to easily farm for resources thanks to her Pilfering Strangledome augmented mod.

#4 Mesa – The Cowgirl of Warframe

Yes, it will take a while until you’ve made your way to Eris, but once you’re there and can acutally farm Mutalist Alad V, you should start so immediately.

Mesa is just that great and there are a couple of reasons why she is often mentioned as one of the best DPS frames in the game.

Even without a great mod collection you can easily find a build that will deal with high level enemies, allowing you to quickly process through missions you might otherwise have trouble with.

There are almost no missions (except of some endgame tasks) where she would be a bad pick. Instead, she often is the best frame for the job, so we really recommend farming her as soon as possible.

You can even use her to quickly kill assassination targets, so farming for more Warframes will get even easier.

There are a few fairly decent support Warframes in the game: Wisp has one of the best overall skill sets, Oberon is great as a mix of DPS and healer.

But there is no way around getting yourself a Trinity, simply because she will open so many doors for you. You should know that Trinity on her own isn’t great, because her damage output is nearly non-existend.

But if you combine her with a dedicated group, you will be able to quickly improve your whole account with new weapons, Warframes and other upgrades.

She is even a viable pick if you’re going into one of the most annoying fights in the game – the Profit-Taker Orb.

There are a lot of Warframes that are great and even though our list offers a few good choices, in the end it is up to you how you want to experience the game.

If you think there are other Warframes that should be on the list, feel free to leave us a comment down below with your own Top 5!