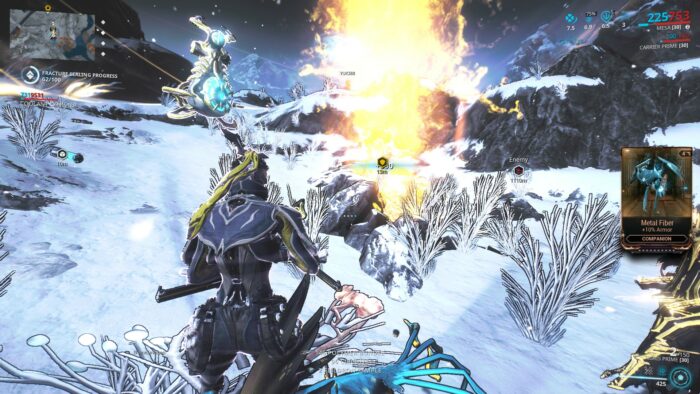 One of the prerequisites to craft yourself a Hildryn is fighting the Exploiter Orb, because this monster of a Corpus weapon will drop all the Chassis, Neuroptics and System blueprints you need.

In order to be able to fight it and to start the event which will lead to the fight you do need to get your hands on Diluted Thermia, a resource that can only be gathered every two weeks during the ‘Operation: Buried Debts’ event.

During that event a lot of yellow fractures will spawn on the Orb Vallis and your job is to seal them, using Coolant canisters. You do need to close four of those fractures with your canister to fill it and get one Diluted Thermia – which in return will allow you to fight the Exploiter Orb once.

This guide will not only help you with understanding fracture farming, but will also give you some pointers to the best Warframes to pick, what weapons to use and what else to think about before storming onto the Orb Vallis.

How To Seal Thermia Fractures

The first thing you need to do when sealing fractures is to get yourself a Coolant canister.

They are dropped by Coolant Raknoids, which are following the Exploiter Orb in groups of five. The Exploiter Orb is running around the Temple of Profit in the northwest of the map, usually in a bigger radius around it.

So fly towards the temple, find and kill a Coolant Raknoid and take the canister to a fracture. To be as fast as possible you should always use your Archwing Launcher and ignore the Exploiter Orb completely.

You can’t injure it at this time, so don’t even bother trying.

Once you’ve found a Thermia Fracture, simply jump into the yellow mass and place the canister where ever the game tells you to.

All you need to do now is defend the canister until the fracture is closed. So sealing the fractures is basically a special version of mobile defense.

To fully fill a canister you need to seal four fractures with it, which will give you one Diluted Thermia.

Once the canister is full it will vanish and you need to find the Exploiter Orb (or rather the Coolant Raknoids) again and get a new one. Repeat this as many times as you want and need.

Update: You can now use up to four canisters in one fissure at the same time, which will speed up the process by a lot.

Putting in more canisters into one fissure will also spawn harder enemies and result in the fissure to erupt with different effects from time to time – rendering protective Warframe abilities useless.

You can farm this mission completely on your own, because with a decent damage output and some defense capabilities you shouldn’t run into much trouble defending your canisters.

That said, playing in a group has a lot of advantages: Not only can you be revived if you somehow catch lethal damage, but the fights are easier, people can pick different roles (DPS, Support, Utility, etc.) and you also save a lot of time if you communicate well.

The best method to save a lot of time is by picking one team mate who is responsible for finding new fractures and getting a new canister if needed.

So while three Warframes are around the active fracture, they are flying around the map and look for another fracture, mark it and then return to the group to help defend.

This way you can directly aim for the next Thermia Fracture and not waste any time by searching for it after the last fracture was sealed.

The same is true for getting a new canister during the fourth fracture of every canister cycle.

To be fair, you can solve this mission by simply bringing a loadout you would also choose for dealing with the highest bounty missions on Fortuna.

Even though fracture farming plays like an endless mission, the levels on your enemies won’t increase and every time you go to another fracture everything resets. Theoretically you don’t even have to bother killing all the beacons placed during the last fracture.

But if you want to maximize your chances of being as efficient and save as possible, there are still some great Warframe picks you should know about:

Best Weapons For the Job

Since you won’t be facing super high level enemies, but rather have to deal with mobs around level 45 to 60, you can usually bring whatever weapon you like.

There is no need to bring a super high damage weapon, like the Tigris Prime or a sniper rifle. Instead bring whatever you do use during bounty runs, because you will meet the same enemies and the same group sizes.

AoE-weapons are a great choice, so picking an Amprex or the Ignis Wraith will help you deal with larger groups of enemies in no time.

Just make sure you have the right elemental mods (magnetic damage is arguably your best choice here) and remember to always kill the alert beacons or you might find yourself fighting a large amount of high tier enemies that not only might kill you, but also destroy your canister.

Farming for Diluted Thermia is tiresome and boring, especially if you want to (or need to) do it a couple of times.

You need to seal four fractures for one resource drop, so getting yourself a resource booster will be super beneficial.

The mission itself isn’t really problematic or hard, just make sure to bring a good Warframe, a strong weapon and some survivability against higher tier enemies.

Doing the mission solo is possible, but super slow and you can usually find a team quickly with the help or your clan or the recruitment chat.

If you think we missed some important information, use the comments and let us know! Also, don’t forget to have fun while farming.