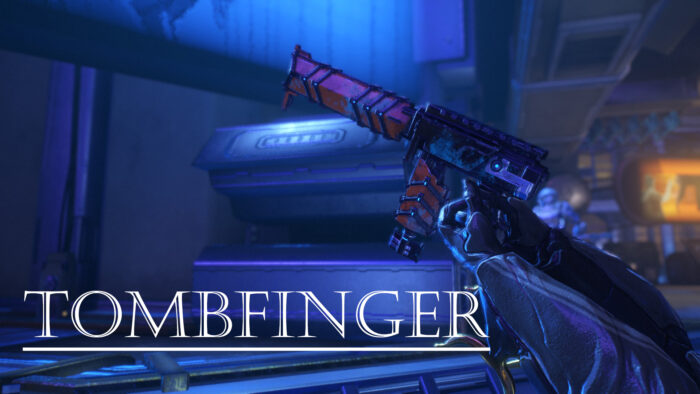 The Tombfinger seems to be the most discussed Kitgun in the game and while a lot of players love the secondary weapon, there seems to be voices that really don’t like the weapon at all.

While some see it as the best choice when building a Kitgun, others are sure that it is the worst choice of all four chambers.

No matter where you end up on the spectrum, fact is that the Tombfinger features innate Radiation and Puncture damage as well as a guaranteed Impact damage proc.

This alone should be enough to at least give the Kitgun a try.

Even though the ingame description suggests that it works like either a rocket launcher or at least very similar to the big projectiles of the Catchmoon, it does fire rather smallish and very precise projectiles.

Those do explode on the first enemy they hit and in theory you are able to damage and kill multiple enemies at once with just one explosion.

In reality this is a little bit problematic, because the explosions are having a reverse-cone shape, meaning the projectile explodes in front of the first target hit.

So you should try to aim for the target in the last row of an enemy group if you do want to use the explosion damage to your advantage.

As with every Kitgun you are free to choose whatever grip and loader you like. But we really recommend going for a high damage and critical chance build, simply because the beam range and fire rate isn’t really important for this weapon.

In addition you can easily get a fairly high status chance as well as more than 100% critical chance without sacrificing your damage if you combine your Tombfinger chamber with a Haymaker grip and a Splat loader.

Even though you could potentially try and build the Kitgun for maximum status chance, it really feels like the reversed explosion cone and the decreased damage of picking another grip would make this secondary way worse.

Feel free to give it a try and make sure to report your findings in comment section below!

Tip: If you want to know more about the Tombfinger and its abilities, feel free to take a look at the wikia page.

If you’re crafting your Tombfinger for critical chance you really want to use Primed Target Cracker and Primed Pistol Gambit (or the normal versions) to get the highest benefits out of your basic stats.

The negative aspect of Magnum Force is somewhat noticeable, especially if you’re trying to hit farther away targets, but the upside is just too strong to ignore the damage addition.

You also really want to add two +60% status chance mods to increase your status chance to more than 70%, which should be enough to proc it when you need it.

We recommend going for Corrosive or Viral damage, but in the end you are free to pick whatever you need and like.

You could also think about picking Hydraulic Crosshairs over Lethal Torrent if you feel like you want to get even higher tier crits.

Even though there isn’t really anything special about this build, it is just through and through a very decent and great version to play if you’re going for our Kitgun build.

Make sure to change your mod build based on whatever parts you choose to combine with your Tombfinger chamber.

The Tombfinger feels like it has a lot of potential, but the fact that the explosion damage is directed towards the front of your first target hit makes the weapon not the best pick for a lot of players.

It is also unintuitive to aim for the back rows rather then the front or the middle of a mob group, which would be the optimal play with this Kitgun.

So while the Tombfinger does have a very high damage output, it sometimes just feels weird to play. If you don’t mind that you do have an excellent representative of a Kitgun.

If you think you’ve found a better build or if we missed some important information, make sure to leave us a comment down below!