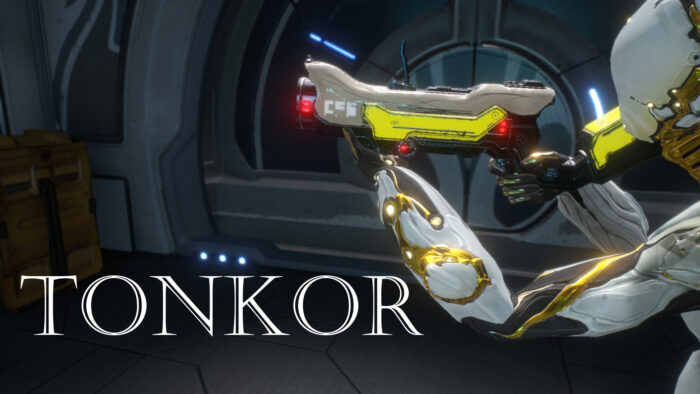 The Tonkor is one of the best examples how weapons and the meta change over time. This grenade launcher used to be the go-to primary weapon and for a lot of people the strongest choice in killing big groups of mobs.

Sadly, a few big changes happened (namely self damage and the fact that grenades need to travel six meters before they are armed/can explode) and now the Tonkor isn’t a great choice a your preferred weapon anymore.

That said, playing a grenade launcher is still a lot of fun and sending a group of enemies flying through the map feels very rewarding.

Like every grenade launcher in the game, the Tonkor does require you to adapt a certain play style, meaning you need to look out for self-damage and also make sure you know how to successfully use your projectiles/grenades.

Also, Nullifier are your biggest enemy and unless you want to run into the Nullifier bubble to kill it, you better bring a good secondary weapon with you.

If you are looking for some ideas on how to build the Tonkor nowadays, this guide should give you a few pointers.

Modding your Tonkor isn’t as easy as it might seem, because you really have to think about your mod choices. For example, the Tonkor is one of the few weapons that can actually use Adhesive Blast (which is virtually useless here) and Firestorm (which is actually not bad and will give you 1,2 meter more explosion radius). Vigilante Armaments is also a great addition (even if you are already using Split Chamber), but you can’t always fit it in and it is often times the mod that didn’t make the cut.

So in the end all the builds displayed here could look somewhat different if you simply make other assessments – and you wouldn’t even be wrong with that. Just make sure to try out different mod setups and build ideas to find the best mod build suited for your own need!

Tip: If you want to know more about the Tonkor and its abilities, feel free to take a look at the wikia page.

Building around the strength of a weapon is often times the best idea to get the highest damage output possible.

For the Tonkor you really want to build around the critical chance and critical damage, while ignoring the status chance completely – at least in theory.

This build right here looks pretty straight forward, with Cautious Shot (a nice reward you can buy from the Arbitrations vendors at the Arbiter of Hex room on any relay) probably being the weirdest choice here.

To be fair, you don’t really need it if you are a cautious player and if you don’t kill yourself accidentally all the time. If you play like me, then adding it to your build will save you a lot of trouble.

If you don’t like to play with Cautious Shot, bringing in either Firestorm or Vigilante Armaments are your next best choices.

You could also think about playing Primed Fast Hands (or the normal version), which wouldn’t be terrible at all.

Since the Tonkor only has one grenade per magazine, you will need to reload after every shot. So bringing in more reload speed will increase your DPS by a lot.

Innate Blast damage is really nice and thanks to the knockdown potential the Tonkor is a great way to crowd control even higher level enemies that are not killed by one grenade shot.

So building around that and increasing the status chance sounds like a good idea. Thermite Rounds and Rime Rounds do exactly that, while Split Chamber and Vigilante Armaments help with a higher status chance as well.

Heavy Caliber, Serration and the two elemental mods will increase your damage output by a lot, so playing for Blast damage is actually viable.

But again, you do have some decisions to make. While you do want to have a high status chance, you sometimes really want to get Cautious Shot in – which isn’t easy here, because you can’t simply cut Vigilante Armaments for it without reducing the status chance by a lot.

Your weakest mod in this build is probably Hellfire, so you would reduce your damage output significantly if you switch it out for Cautious Shot.

There is also an argument to be made about using Firestorm in this build, simply because a higher explosion radius is a great way to crowd control more enemies.

This build tries to combine the two builds from above and find a build that will deal great (critical) damage with a good chance to proc the Blast damage for crowd control.

There shouldn’t be a lot of surprises her, because you simply pick the best mods from the two builds, combine them and you will end up with something that looks exactly like this version.

That said, Primed Fast Hands is again in the ‘pick what you like’ slot and could also be a Cautious Shot, a Firestorm or Vigilante Armaments.

Personal preferences and your own play style should be the reason why you pick one of these mods in the end. So try them out and find the build you like most.

The Tonkor isn’t what it used to be – that much is clear. But it is still a nice weapon to get, especially if you are a fan of big explosions and sending enemy bodies flying.

It does have some problems though and you should really try to get a feeling to hit the six meter minimum range you need for your projectiles/grenades to explode.

If you don’t want to self-damage yourself you should either get the Cautious Shot mod or train yourself not to run into your shot grenades.

If you do have some information regarding the Tonkor and it’s builds, feel free to leave us a comment. The same is true if you found a built we did not mention here – we are always happy to find more builds for Warframes and weapons!