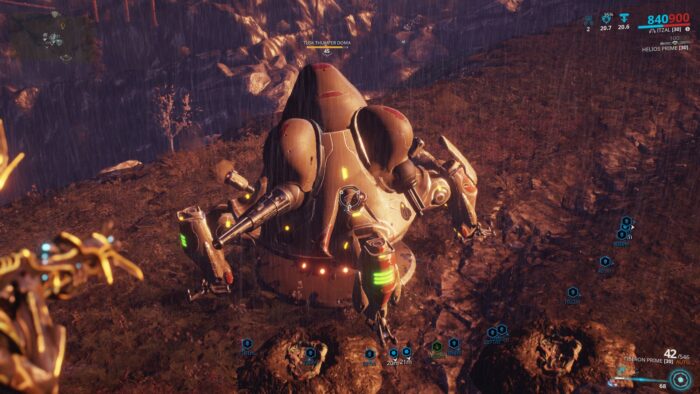 While the Eidolon roam the Plains of Eidolon during the night, the day belongs to the Grineer and their heavily armored vehicles, called Tusk Thumpers.

Those four-legged enemies will spawn randomly somewhere on the map and will not only follow and attack you, if you come to close, but they are also a great source for extra rewards.

You can and will encounter them while you’re doing Cetus bounties, but you could also just go into the free-roam-modus and search the Plains for the enemy.

Once you’ve found yourself a Tusk Thumper, you need to kill it in order to gain the different drop rewards.

While the fight itself isn’t hard at all, there are still some tips and tricks you can utilize to make the fight even easier.

Just make sure to join the Plains of Eidolon during day time, because the special enemy will not spawn during night.

The best way to spot one is using your Archwing Launcher and fly around until you (or one of your team mates) find the big vehicles.

How To Kill Tusk Thumper

Once you’ve found an Tusk Thumper, you can start engaging directly.

Here are the few steps you need to repeat:

After you destroyed all four legs, the Tusk Thumper will be defeated and then drop Plains of Eidolon resources as well as other stuff.

If you did bring a Nekros into the fight, you will get the chance to double the drops.

After 90 to 120 seconds another Tusk Thumper will spawn somewhere on the map.

There are some simple ideas to make the fight easier, which not only will result in a faster killing time, but also in a better way to farm the Tusk Thumper for its rewards.

Here are some ideas on how to simplify the fight:

But if you try out the different tactics from above you might find yourself killing the enemy super fast and increasing the time needed for the reward you are looking for by a lot.

Of course you do want to get something out of killing the Tusk Thumper and there is plenty of rewards you will get for your trouble.

There is also a 15,04% chance to drop one of the following rare mods:

This weapon can only be acquired by killing these Tusk Thumpers and is often the main reason why people even bother killing the Grineer vehicle.

Sometimes – especially during bounties – it can be super annoying to find one of the Tusk Thumpers. They will follow you around and attack you, which will make your life somewhat troublesome.

But killing them is very easy, so just take a few minutes and destroy it. If you are going to farm it for the potential mod or weapon drop, make sure to bring an Archwing Launcher to speed the process up by a lot.

If you think we missed some important information or if you have some general tips you want to share, feel free to leave us a comment.