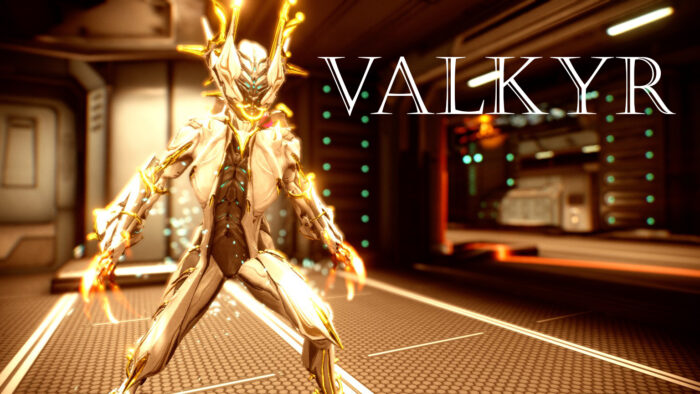 The female warrior Valkyr is one of the oldest Warframe in the game and was released shortly after the open beta launch in 2013.

Her lore is quite interesting and you should definitely learn more about her origin story and her rage. She features a wide range of fast and furious melee attacks and combines them with a great defensive mechanism.

Valkyr’s blueprints are dropped by the Alad V, so kill him a couple of times on Thermisto (Jupiter) to get everything you need.

As a melee Warframe she might be vulnerable to high damage attacks, especially when combined with knockdowns.

Gladly, Valkyr not only has a passive ability that allows her to recover super fast from a knockdown, but with the right build you will also be able to become an invincible warrior and claw your way through every enemy you meet.

To do that you do need to find a great build and fortunately for you, you came to the right place!

If you want to know how to get the Warframe, check out our guide on that!

Valkyr is a melee Warframe, there is no doubt about that. She comes with her own set of melee weapons and her skill set is supporting the melee combat style.

So there is no reason why you wouldn’t pick Steel Charge as your aura mod – unless you really need to get the fourth Corrosive Projection in your team.

But in almost every mission in the game your are better off with picking the melee damage increase aura.

Also, all the builds mentioned here are not using your first ability ‘Rip Line’ at all. While it is a fun ability, using your bullet jump is usually the better and faster option.

If you really do like to use ‘Rip Line’ a lot, go ahead and add more ability range to your build.

But honestly if you learn how to use bullet jump you will gain more from that than from using your first skill.

Tip: If you want to know more about Valkyr and her abilities, feel free to take a look at the wikia page.

Valkyr’s exalted weapon is called ‘Talon’ and is a short range melee weapon that mainly shines because of the high critical chance and damage.

The weapon also features an innate lifesteal of 5%, which is obviously super strong. Since it is a very short ranged weapon you don’t want to use Primed Reach (or the normal version) at all.

Instead you want to focus on an faster attack rate (Primed Fury and Berserker), increase the critical damage and chance and also use Primed Pressure Point and Spoiled Strike to get the most DPS out of your already high base damage.

Make sure to change the elemental damage types if needed to get the highest advantages against the different enemy types in the game.

This is probably the standard build and the version you will use the most.

It focuses on increasing your capabilities with your ultimate ability ‘Hysteria’ and also enables you to get as much as possible out of your ‘Warcry’ activation.

Especially the augmented mod Eternal War is very useful here and will help increasing the benefits of one activation by a lot.

Primed Continuity not only increases the duration for your second ability, but also reduces the amount of energy drained per second while you have ‘Hysteria’ activated.

The same is true for Narrow Minded, so while that mod will decrease your ability range a lot, it is still worth it.

Hysterical Assault is here to help with the biggest weakness of Valkyr: The range of her weapons and abilities is really short, so leaping into enemies to close the gap is a great way to be fast and efficient.

Talking about efficiency, Fleeting Expertise is great and together with Streamline you should be able to keep your abilities up the whole time.

If you never ever have any trouble with your energy pool you might even consider using Blind Rage over Intensify here.

By the way: If you don’t know how to use your Hysterical Assault, don’t worry – it is super easy. Just jump and then use your melee attack (The ‘E’ key on your keyboard).

Valkyr will jump towards the point you aimed at.

While you could also use the ‘Hysteria Build’ for all the non-endless mission types, you often want to increase your speed while running through exterminate, rescue or spy missions (or whatever mission type you’re going to do).

So including Rush and Armored Agility will help with that. You might even think about Constitution over Narrow Minded to get the even faster knockdown recovery or just get Handspring for that reason.

The build is somewhat similar to the ‘Hysteria’ build, but you really don’t need to bring the ‘Warcry’ augment here. You don’t need it in those fast missions and you rather have more sprint speed.

Valkyr is one of the best (if not the best) melee Warframes in the game and can quickly dissolve big mob groups or cut her way through almost every assassination target in the game.

Just make sure to always have enough energy to keep your fourth skill up and you shouldn’t get into any trouble surviving and killing enemies.

You might need to recast your ‘Warcry’ from time to time, so keep an eye on that, but otherwise you will be able to just claw your way through all the missions in the game.

If you think we missed an important information or if you found another great build, feel free to leave us a comment!