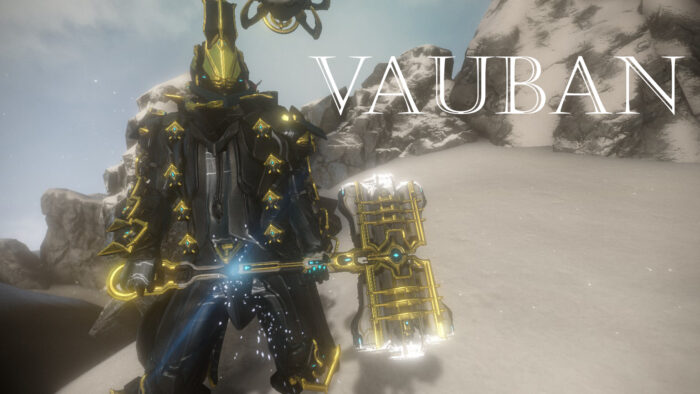 Once upon a time Vauban was one of the most played Warframes in the game, being the meta for raids, excavation missions and more.

But with more and more Warframe releases (and the discontinuation of raids) he sadly became obsolete, weak and simply wasn’t useful anymore.

Luckily Digital Extremes decided to give him a complete rework (even though it wasn’t the first time his abilities got changed) with the Update 26, also knows as ‘The Old Blood’.

At the same time, Ember got a rework as well!

Even though the spirit of Vauban’s skill set was preserved, the abilities changed quite a bit and made Vauban a great choice as a fun-to-play pick.

If he can insert himself into the current farming meta is hard to tell, especially since he brings a combination of crowd control, utility and damage whereas most players do want a specialist in either one of these categories.

However, if you are looking for some build ideas you’ve found the right guide! And don’t forget to check our ‘How to get Vauban’ guide if you need information on that!

Vauban really needs to have as much energy as he can get, so picking Energy Siphon seems like the best idea.

That said, sometimes you rather bring Corrosive Projection to reduce your enemies’ armor and increase your and your team’s damage output.

So in higher level missions (and against enemies with a lot of armor) you just switch out your aura as needed.

There might also be some corner cases where you do want to bring Rejuvenation to heal you, your team and possible your companions, but usually you want to pick one of the two auras mentioned above.

Tip: If you want to know more about Vauban and his abilities, feel free to take a look at the wikia page!

Using your ‘Vortex’ ability in combination with your ‘Photon Strike’ nuke is a great way to deal heavy damage against enemies of all levels.

The idea here is fairly simple: Cast your ‘Bastille’ ability, instantly switch it to ‘Vortex’ (by pressing the ability again) and once a few enemies are close enough to the center of your vortex, use your nuke and kill everything in range.

Of course 12,5 meter range might not look like a lot, but it is usually enough to kill enemies inside your vortex.

You do want a lot of range (even though you don’t need to get maximum range) and combine it with some efficiency (you really want both, Fleeting Expertise and Streamline, to counter-act the drain of Blind Rage) and your best ability strength mod – which should be Blind Rage.

Even though 139% strength might feel like it’s not enough at first, you quickly realize that your crowd control in combination with your nuke should be more than enough damage.

If you’re lucky enough to never have any energy problems, switch out Primed Flow for Constitution for more duration or use Intensify if you want to increase your damage output.

This is the most classic Vauban build in the game and basically gives you exactly what Vauban used to do in the old days: Pop your ‘Bastille’ ability, lift up 21 enemies at the same time and use your weapons to kill those enemies.

The build is great for every situation that calls for crowd control – e.g. excavations, defense missions or interception – and is even strong enough to be used in Arbitrations (as long as you quickly kill the Arbitrations Drones).

You do want a decent amount of duration and range for the the crowd control and pick as much ability strength as you can get.

The latter will not only affect the amount of enemies that can be lifted up simultaneously, but also increase the armor debuff of your skill.

As usual, if you don’t have Umbral Intensify or Primed Continuity, simply pick the normal versions and upgrade at a later point.

This build actually the biggest surprise for us, because while the old mines used to be fun and decent enough in lower level builds, the new mines are great throughout the whole game – especially if you build around the Flechette Orb.

The idea is fairly simple: Get a lot of duration and as much ability strength as you can grab, get into an endless mission and simply spam your mines.

With 70 seconds duration and a good area-of-effect damage output your mines will deal even with higher level enemies and kill everything in range.

You could cycle through all your other mines and use them as well – but usually they are not as useful. Since your Flechette Orbs don’t scale with anything but ability strength you can simply ignore ability range.

That gives you Narrow Minded and a lot of ability strength since you don’t have to pick Overextended.

Vauban is still (more or less) the same Warframe he used to be years ago.

Sure, his passive ability changed a couple of times and he got a small rework for his second ability, but especially ‘Bastille’ and ‘Vortex’ are still some good crowd control skills.

Sadly, crowd control feels pretty useless nowadays and there aren’t many missions you need CC to begin with.

But if you are looking for a still pretty fun-to-play Warframe that comes with different builds and the chance to still be great in the right setup, then get yourself a Vauban!

If you think we missed a build or if you found some improvements, leave us a comment!