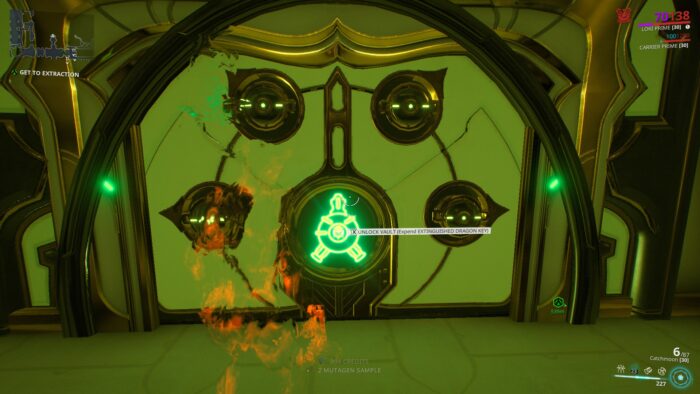 At some point in the game you will ask yourself the question everyone asks: Where can I get better mods? If you take a look at all the weapon and Warframe builds in the game there is a good chance that you will find a lot of the so called ‘corrupted mods’.

They usually have a very strong advantage, but will also come with a noticeable disadvantage – for example giving your Warframe a lot of ability strength, but also reducing the duration of your skills.

There are currently 23 different corrupted mods in the game and you will need at least 50% of them to finish your endgame builds.

These very special mods are only obtainable by opening the Orokin Vault, which is located on the Orokin Derelict tileset.

Getting there is pretty easy (at least in theory), but will need a little bit of preparation.

But if you are looking to open the world, you also need to get special items, called Dragon Keys.

This guide will tell you where you will get all the resources and blueprints needed, how to be as useful as possible and it will even give you an example on how to solo the hunt for the Orokin Vault.

The Preparation (Craft Everything You Need)

Before you can start on grinding Vault Runs, you do need to craft the blueprints for the Orokin Derelict missions first.

They are easy to get and can simply be bought in the market for 2.500 credits for each of the seven different mission types.

Crafting them should also be no problem, with the Nav Coordinates being the hardest resource to farm for.

Here is what you need for the Capture mission, which is what most people if they want to hunt down the Orokin Vault:

With a crafting time of only one minute you don’t need to craft a lot of keys in advance (with the assassinate mission being an exception).

It’s also important to note that you don’t need to buy new blueprints every time you want to do a mission, so simply crafting it again in your foundry is enough.

To open the Vault once you’ve found it you will need to equip and bring a so-called ‘Dragon Key’ to the door.

Which key is needed is totally random, so for a 100% chance to open the Vault you will need to bring all four Dragon Keys – which is one of the reason why people usually go in as four.

Each Dragon Key comes with a unique negative side effect and will make the mission way harder. Equipping one can already be problematic, equipping all four is really unwise.

The side effects are:

The blueprints for the four different Dragon Keys are purchased in the Dojo at the Orokin Lab (check the ‘Research Solar Rail’ console) and can be bought for just 500 credits.

Crafting them is also pretty cheap, because you only need 500 Credits, 250 Ferrite and ten Void Traces.

The Best Warframes for Orokin Vaults

Once you’ve found a group you need to decide which member of your four-man-team brings which Dragon Key.

Everyone should bring one key and try to counteract the negative side effects by equipping it with a Warframe that doesn’t get a big penalty for wearing one of the keys. There are usually some good choices to make.

Don’t forget to equip the Dragon Key through into your Gear Wheel before hopping into the mission.

During the mission your team should split up and search the whole map for the Orokin Vault door. Once you found it, make sure to mark it and announce in chat which Dragon Key is needed.

That way not everyone has to run through the whole map. Once it is opened everyone will get a corrupted mod after extraction, so finish the map (Capture or Exterminate are the fastest mission for the run) and head towards the extraction marker.

Here are our Warframe suggestions for each key:

Honestly, it doesn’t really matter which Warframe you bring here.

If you plan on doing some Vault Runs with a four-man-team you don’t really need to think about bringing a lot of damage.

If your Hobbled Key player doesn’t bring a Speed Volt, you should pick that with the Extinguished Key. Otherwise play whatever you do like most.

Equipping more than one key can already heavily influence your performance in a Vault Run, but if you really want to play the mission in solo mode you do need to have all four keys equipped to really have a 100% chance to open the Orokin Vault.

Even though that does sound like a big problem there are a few Warframes that can achieve this and make sure your run isn’t going to be a total disaster.

Here are our suggestions for Warframes to pick:

Finding the Orokin Vault door can sometimes be troublesome, especially if you play alone.

Make sure to open your map (press the ‘M’ key) and look for every door or potential tunnel you can find. Otherwise doing the solo run shouldn’t be super hard, especially if you already have done some runs on the map and know exactly where to look.

Doing Vault Runs is one of the best ways to improve your weapons and Warframes, simply because the mod drops from the Orokin Vault are very strong.

The best way is to find a four-man-team and just rush through the mission. Bring your best Warframe, don’t forget to equip a Dragon Key and you will be able to find a lot of rare mods in no time.

It is also a great idea to farm the Orokin Vault and sell the mods you don’t need to get a little bit of extra Platinum.

If you think we missed something important or if you have another idea, let us know in the comments and help out the community with your knowledge!