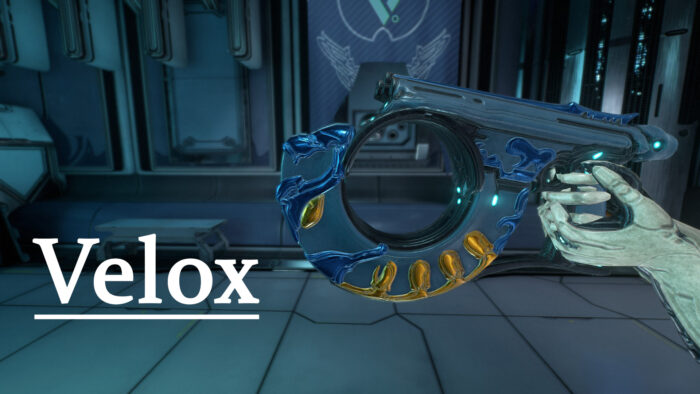 The Velox is a secondary weapon that got introduced into the game with Update 28.

It is also the signature weapon of Protea and gains some bonuses if wielded by the 43rd Warframe: While carried and used by Protea, the weapon does get 40% ammo for free (only three of five shots are using ammo!).

If you managed to empty your whole magazine, you will get a reload speed boost (even if you’re playing another Warframe).

The weapon itself offers a high amount of innate Slash damage, a fairly good critical chance as well as a high status chance. Combined with a fast fire rate it is a super useful weapon that can easily be compared to something like the Akstiletto Prime.

The main blueprint can be bought from the Market for 25.000 Credits, while getting your hands on the two parts needed is also fairly easy, since you will run through the Granum Void anyway to farm for Protea.

While the Velox is a very strong secondary weapon that can be used throughout the whole game, the builds aren’t super extraordinary.

Instead you’re going to use your tested build ideas, which will give you the best damage output as well as a good set against different enemies.

If you want to be a little bit more adventurous with your builds, try to fit in a Primed Quickdraw or get the Hydraulic Crosshairs bonus.

Even some weaker mods like Stunning Speed might be worth looking it, just to get a good combination of added damage and quality-of-life improvement.

This version is probably what you’re going to pick most of the time: It combines the high critical chance with the high status chance and improves on those advantages.

You don’t have to go for Corrosive damage, just make sure to pick up (at least) two +60% status chance mods.

Primed Pistol Gambit and Primed Target Cracker (or their normal versions) are absolutely a must-have in this build.

Regarding the exilus mod slot, you could easily pick up Trick Mag or even Spry Sights, so feel free to pick whatever you do enjoy most.

If you would like to try out some other mods, you probably want to start by removing Barrel Diffusion and using whatever mod you’d like to work with.

This build is mainly for situations where picking a single status chance isn’t in your best interest – for example for a run-through of some Void missions.

While the base is fairly similar to the Hybrid Build from above, you do want to increase your critical damage output as much as possible.

Creeping Bullseye and Hallow Point are therefor a nice addition.

This build would also profit from using Hydraulic Crosshairs, so if you don’t mind running around while aiming, give the mod a chance and see for yourself if that play style is working for you!

The Velox is a great secondary weapon, even if you don’t use it with Protea. The fast fire speed allows you to plow through lower level mob groups like a hot knife through butter and the fact that you can build it for pure critical damage is absolutely useful – especially in missions where the hybrid build falls off.

If you found another build or if you simply want to share your own ideas, feel free to leave us a comment down below!