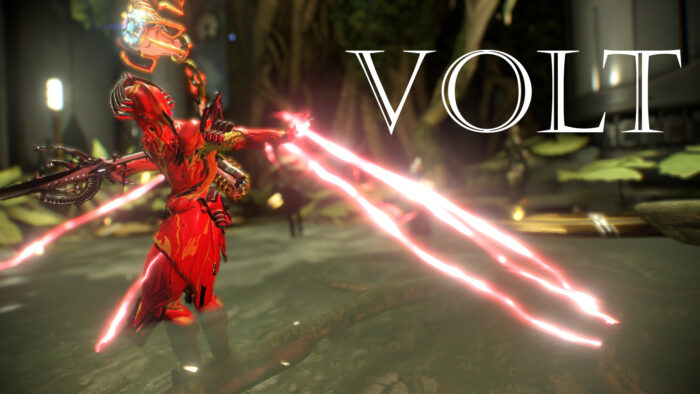 Since his release during the beta and his primed version in March 2015, Volt quickly became a loved Warframe. Nowadays he is one of three Warframes new players can choose as their first. If you didn’t pick him, don’t be sad!

You can simply buy his blueprint and parts from the Tenno Research Lab in a dojo. A lot of clans out there will help you out with that!

There are a lot of different builds out there and using him in different situations can be very beneficial for yourself and your team.

If you are looking for one of his builds in particular or if you just want to browse and get to know him a little bit better, this guide will help you with both!

Going for the Naramon aura polarity is probably the best choice if you want to start going for a lot of different builds.

That said, there are builds out there that will benefit from using Steel Charge and if you want to main Volt with a melee build, picking this aura is recommended.

Choosing between Energy Siphon or picking Corrosive Projection usually depends on the mission type and enemy level, so change them as needed.

Tip: If you want to know more about Volt and his abilities, feel free to take a look at the wikia page! 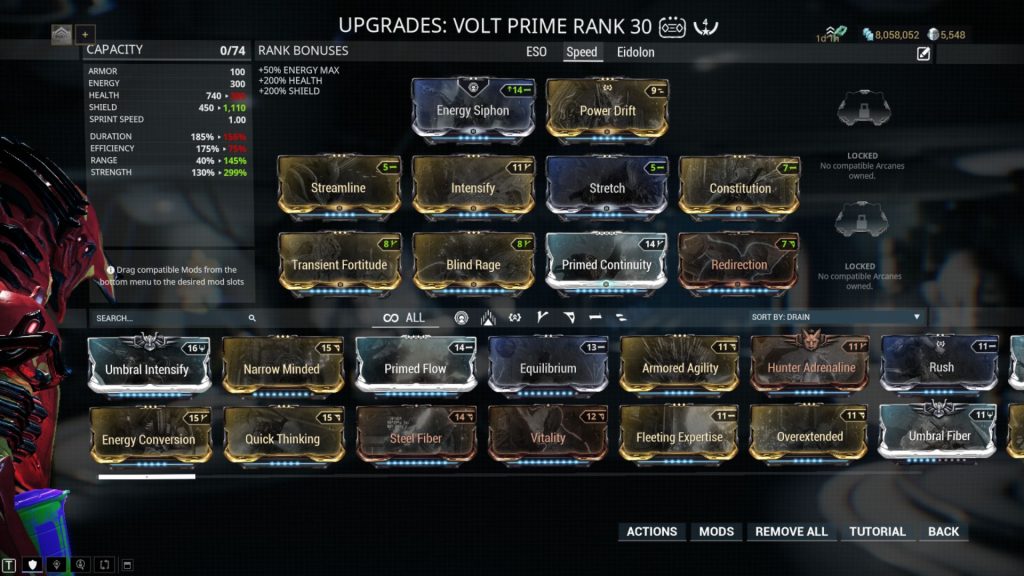 A lot of player only pick Volt if they need to speed everything up. Do you want to be as fast as possible while farming capture missions? Volt will help!

Do you need to run around the Plains of Eidolon? Volt is your man! Do you plan on rushing through a rescue Sortie? Volt! Boss fights? Speed Volt!

There are a lot of reasons while you need to be as fast as possible, but most of the time it is just a quality of life improvement.

The build itself is pretty forward and you want to combine ability strength with some duration.

Stretch is used to make sure you are buffing your allies and if you don’t like Redirection (or expect a lot of toxic or slash damage), go ahead and change it for a Vitality mod.

Picking the best Exilus mod is somewhat tricky, since most people will just use Rush for even more movement speed.

That’s not wrong, but think about the use of this build: You’re going to speed yourself and your team up to be faster during mission types that can be done very fast. Y

ou are not going to be the main DPS of your team and picking Rush over Power Drift (or even Cunning Drift) will make sure that you are probably going to arrive first – and then have to wait for the rest of your team.

So while Rush might be helpful, a lot of times you can’t really benefit from it. 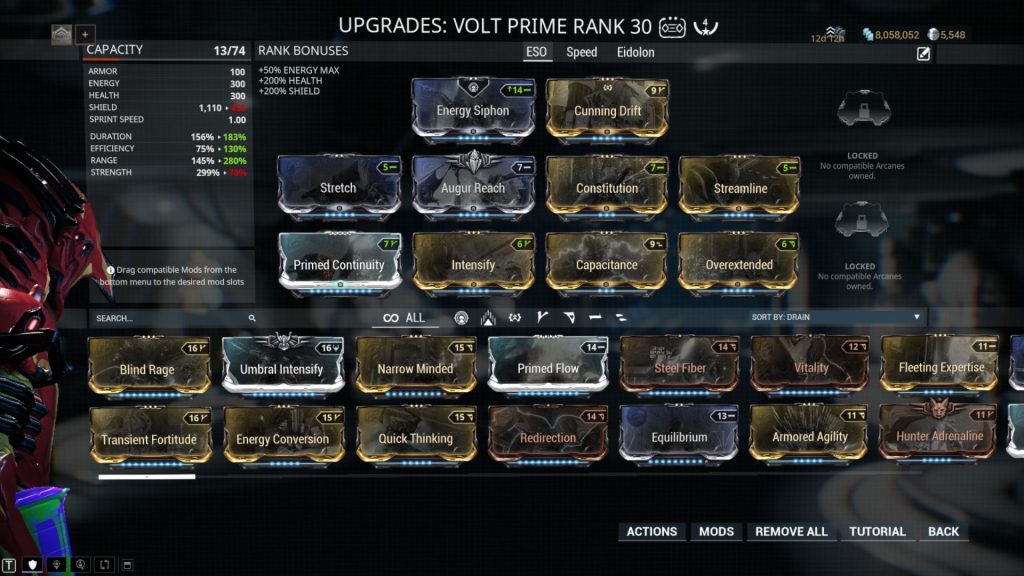 Volt is very strong in Elite Sanctuary Onslought runs and due to the high density of enemies you can deal a huge amount of damage.

All you need is a lot of range, some duration and efficiency and the augmented mod Capacitance to not die all the time. Having less than 100% ability strength might seem disadvantageous for a DPS build, but you really don’t need it.

Sure, you’re not going to out-damage a good Saryn Prime build in the long run and after eight zones you start to fall off really hard, but this build gives you some solid crowd control and really good damage.

Just make sure not to spam your ultimate ability, since Cephalon Simaris will block it for some time if you cast it too close to the last activation. So always wait until the duration is done before you recast it – should be around 10 to 15 seconds.

If you do have Energizing Dash or a Trinity in your premade team you don’t need to use Energy Siphon and rather choose Corrosive Projection, but often times you need the extra energy (especially on maps with energy drain in any form).

So feel free to switch the aura as needed and don’t forget to use your third ability if you are under pressure to shield yourself and your team from incoming shots. 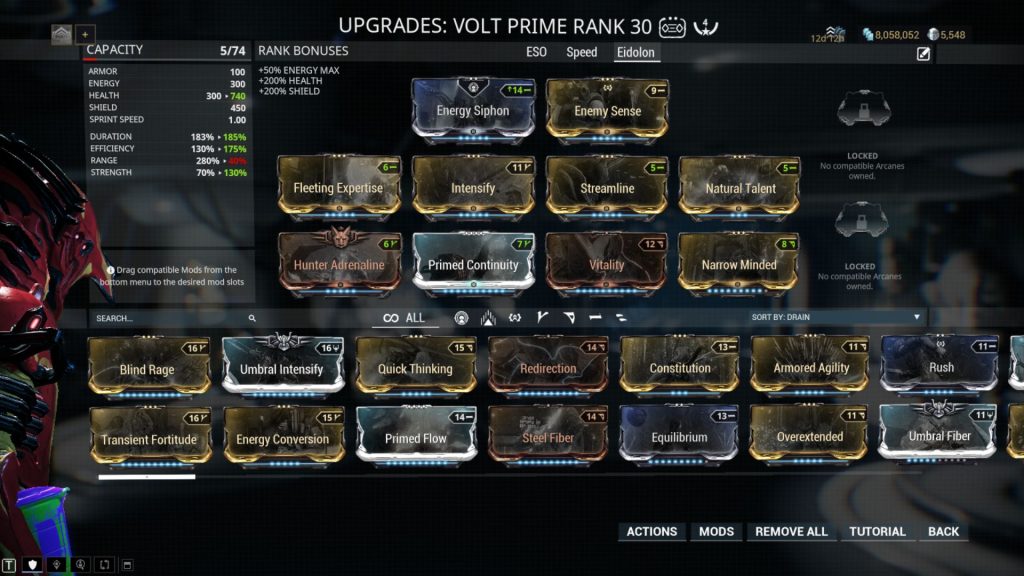 A lot of players enjoy hunting the Eidolons and usually need a Volt to buff them – increased movement speed and reload speed are an essential part of a lot of groups out there and you also need to use your shield as efficiently as possible.

So you get a good amount of efficiency, duration and some ability strength, while range doesn’t play any role. You’ll be sticking together, so you really don’t need extra range.

Energy Siphon and Enemy Sense won’t help with fighting the Eidolons, but will make the whole mission way smoother.

There are always annoying enemies around that need to be killed as fast as possible. You can also just pick Redirection over Vitality, but it does combo well with Hunter Adrenaline. 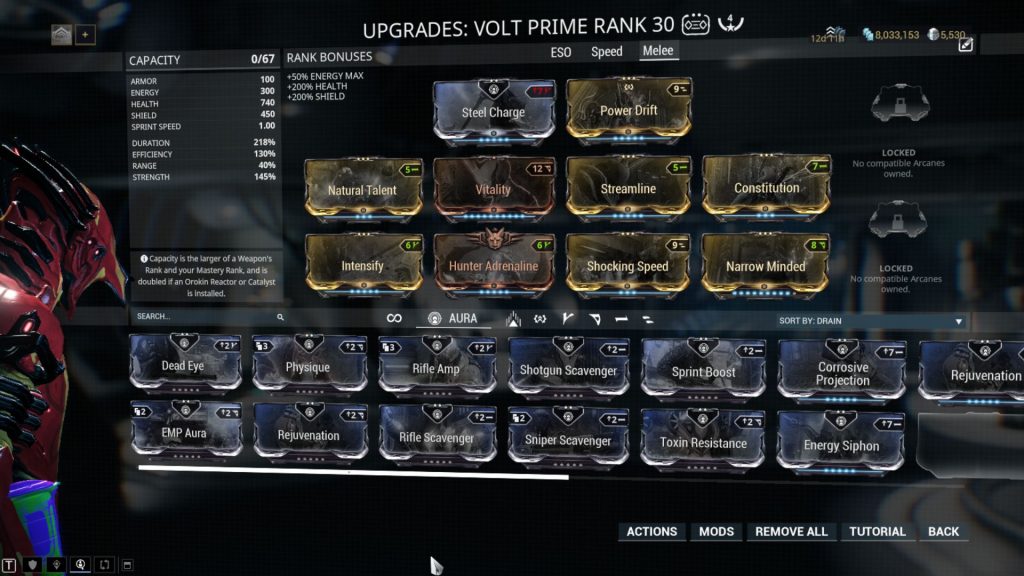 Building Volt for melee combat is very strong and especially if you can combine your Warframe with a good modded melee weapon you can quickly kill even high level enemies.

Vitality and Hunter Adrenaline are your survival combo, but if you find yourself dying a lot, go ahead and use Redirection as well. Shocking Speed also helps with survival and damage and is the ideal addition to this build.

A good amount of duration will make sure that you don’t need to cast your second ability over and over again, while some amount of ability strength helps with better speed and allows you to also get some damage output with your first or even fourth ability.

Natural Talent helps to cast your buff while you are in melee combat, but isn’t super important – Redirection, Primed Continuity or Rage are good replacements.

Steel Charge is the obvious choice for the aura slot, but picking Corrosive Projection or Energy Siphon (or even Rejuvenation) can also be valid.

Especially if you don’t use the melee build as your main volt build, going for one of the Naramon mods might be the right choice.

Volt is a really good, versatile and amazing Warframe. If you did pick him as your first Warframe you surely did not regret it.

He can boost melee and weapon combat (with reload speed) and can even shine as a main DPS in certain groups. There are a lot of different builds out there and you should always cater them to your needs.

So try the different builds, enjoy the great potential of this Warframe and just have fun playing with Volt!