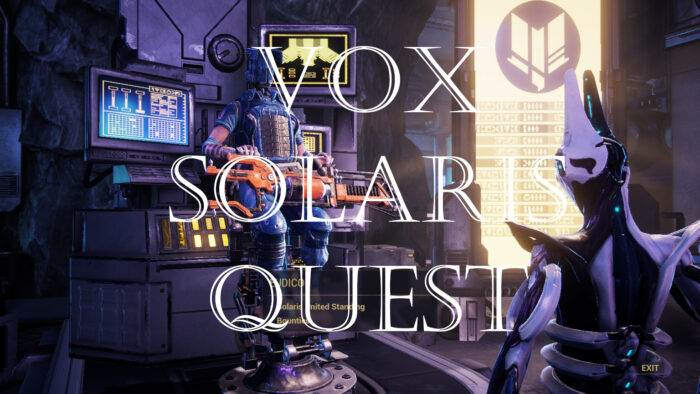 Getting to Fortuna is pretty easy, because all you need to do is reach Venus and join the node. What comes after that is where it starts to get a little bit grindy.

But before you can start hunting down bounties, farm and craft parts for the new Garuda Warframe or finally use your first K-Drive you do need to start (and finish) the Vox Solaris Quest.

This guide will give you a little walkthrough of that quest line – but be aware that this will obviously include lots of spoilers.

So if you want to experience the quest on your own, don’t read any further. Otherwise enjoy this little guide!

You can simply start this quest by talking to Eudico, a foreman (or woman, in this case) on Fortuna. She tells you that you should find Thursby, who is in need of some credits.

The hard working robot had to inherit his parents debts and if he doesn’t get any help, Nef Anyo will send his repo crew. They will not only take everything in his shop, but also his arms and legs.

So quickly head over to Thursby (follow the quest marker) and talk to him.

Thursby want you to use your Tenno powers and steal valuable goods from Corpus camps on Orb Vallis – the open world of Venus.

The mission itself is pretty easy: You either just walk to the marked area or use the Archwing Launcher.

If you don’t have the latter, go ahead and craft it now. Moving through Orb Vallis on foot or later on with your K-Drive might be fun, but it is also very slow.

Especially if you plan on doing group runs, getting yourself the Archwing Launcher is totally worth it and will help you out by a lot!

Once you reach the marked area you simply need to find three supply cashes. Use your sound to quickly find all the cashes, since they will make a ringing tone.

Once you have the cashes, Thursby wants you to destroy a coolant tower, but Eudico interferes and tells you both that you are using a not-so-secure line that probably has been tapped by Nef Anyo and the Corpus.

In order to get out of trouble you quickly have to find and destroy that spy drone.

Find the drone, destroy it and then kill 30 enemies while Eudico uses her superior hacking skills to erase the last trace of the recording.

Once you’re done with that, you simply head back to Fortuna and start with the next part of the quest.

Tip: This is a super low level mission, so feel free to bring any weapon or Warframe you like. For super easy mode you probably want to use a area-of-effect DPS like Equinox, Ember or Banshee. 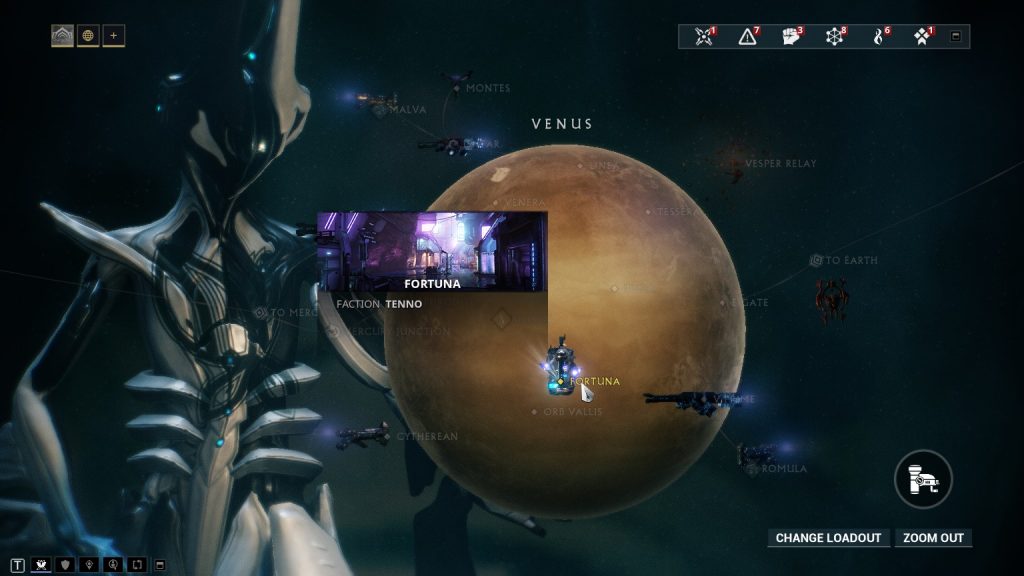 Thursby is very happy right now, because you not only helped him out, but he is able to start his own shop thanks to you. He refers you to another worker, called The Business, who also requires your help.

His methods are more drastic and he want you to use a K-bomb to kill the entire repo squad, who uses a list with all the indebted people of Solaris. But again, Eudico interferes and tells you to not use violence, but rather sneak into a facility and steal the list from a terminal.

So head out, follow the quest marker and hack the terminal in question. Don’t get caught or it will trigger an alarm.

The best way to not get caught is using a DPS Warframe and kill everything before you’re seen. Once you get the list, you quickly realize that The Business‘ field squad is on the top of the list. Now you have to hurry or the repo squad will be there before you are.

Sadly, you are already to late and once you reach the marked location you only find four deceased bodies.

Inspect each of them and wait until Eudico analyzed the memory of the dead. She’ll tell you that the rest of the squad was captured and is awaiting a “processing” of some sort.

So quickly head to the new location, hack a terminal and defend the area until the hack is completed. Also kill Terra Jailers, who will drop from incoming ships, and gather the data keys to speed up the hacking process.

While you’re heading back to Fortuna, a transmission from Nef Anyo tells you that Thursby has been repossessed as a compensation for his earlier stunt.

Tip: Again, this mission is very easy if you pick a good area-of-effect Warframe. 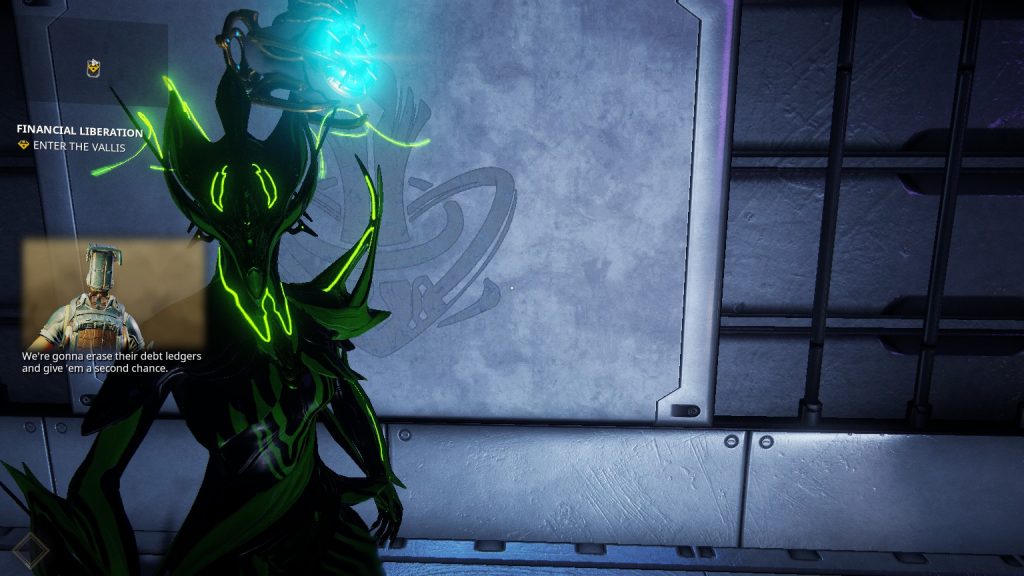 Part 3 – Find and Talk to Eudico

Once you’re back to Fortuna, head to Eudico and hear her out. She tells you that Thursby has “so much missing” and that she thinks that it’s all your fault.

Then she contacts Nef Anyo, since he wants to activate the new coolant tower. But the tower is still unfinished and could destroy the Vallis.

Therefor Eudico needs your help, so head out and find a single excavation side to drill for Amarast, a mineral that will help to control the coolant tower.

Simply defend the excavators and kill everything in range.

After you’re finished, Nef Anyo wants to test the new coolant tower before he shows it to his investors, so head to the quest marker before it is too late.

Once you arrive there you find out that Nef Anyo already started the tower and that you are late again. The tower malfunctions and Eudico wants you to return to Fortuna since you aren’t of any use right now.

Tips: The excavators do have extra shields and health, so it is pretty hard to lose them.

But you probably still want to use a good area-of-effect Warframe or at least a Frost to shield the excavators from enemies.

While talking to Eudico again you realize that Nef Anyo wants to kill 50 workers for the malfunction of the tower. Since Eudico doesn’t want to sacrifice the lives of her comrades she asks you for help – which you of course will give.

You receive a package and The Business tells you that his K-Bomb has gone missing. Once you are back outside you have to detonate the bomb and kill of some Corpus waves until Nef Anyo sends a Profit-Taker Orb, a very big and scary creature you cannot kill.

Retreat back inside for now and wait for further instructions from Eudico.

Tip: Fighting of the Corpus attacker is pretty easy if you have a good weapon or a DPS Warframe.

Eudico tells you that she managed to arrange a surprise for Nef Anyo outside, but you do need to slip past the Profit-Taker Orb. To do that you finally get to use the K-Drive, so head back outside and use it.

Simply drive by the big spider creature and to the marked point at the coolant tower. Hack the terminal, defend it and wait until it overheats.

While all that happens, Nef Anyo bargains and threatens Fortuna and its people, but they call his bluff and tell him they would rather all die then live in poverty.

Nef Anyo finally gives in, you can use the Amarast you gathered before and reduce the heat cascade from the coolant tower. Now head back to Fortuna.

Tip: Same as before. Get a good area-of-effect Warframe and kill everything. Easy peasy. 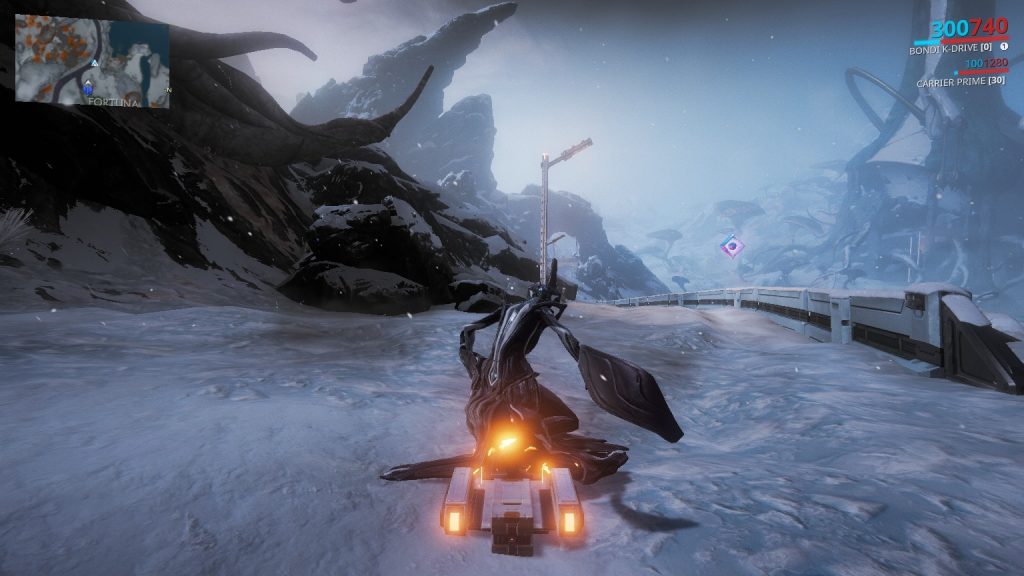 Once you are back you receive your first K-Drive Launcher as well as a message from Smokefinger, who found a blueprint of the Garuda Warframe.

You’re now able to start doing bounties and farm standing for all the new syndicates. You can also buy parts for your own MOA, get equipment for fishing and conserving wildlife as well use the Ventkids for K-Drive purposes and find Smokefinger for mining gear.