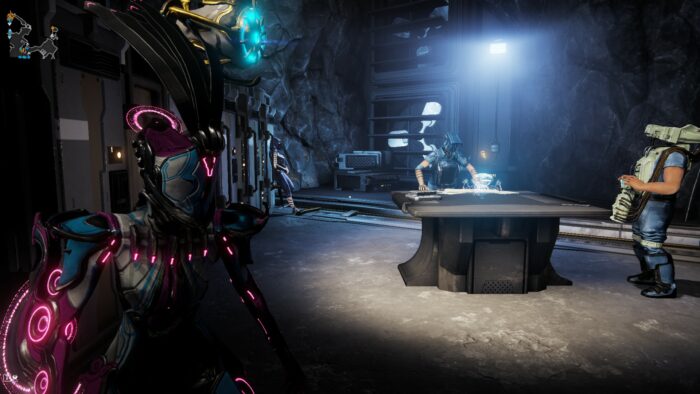 The Vox Solaris is one of the newer syndicates in the game and was fully introduced into Fortuna with the 24.2.9 Update.

It’s known members include Eudico, The Business and Little Duck, while the latter works as your agent-in-charge when it comes to leveling up your standing and trading said standing for new stuff.

This is also the best way to get your hand on Baruuk, who was also introduced at the same time as the new heists, called ‘Profit-Taker Orb Heists’.

If you need more information about that, go ahead and read our walkthrough.

If you are looking for a guide that will tell you exactly, how you can maximize your standing farm and what else you should know, then keep on reading.

And maybe you’ll even find information you didn’t know before!

To be honest, if you not only want to get your hands on the Baruuk parts, but also on all the new Arcane Enhancements and the new Amps you’re going to need a lot of standing.

Generally speaking, farming a lot of standing is pretty easy, because you can simply trade the Toroids of Fortuna until you reached your daily standing cap.

If you want to do that, we highly recommend to use our Fortuna Resource Farming Guide and find yourself a dedicated group.

So kill him a couple of times and get 6.000 standing per Crisma Toroid. This is a great way to farm lots of standing, because you can keep on farming Toroids even if you reached your daily standing cap – you just hand in the other Toroids the next day.

Make sure that you get yourself to the highest rank of Solaris United first, otherwise you won’t be able to start grinding for the Vox Solaris standing.

Also play through the heists once before you start killing the Profit-Taker Orb over and over. Getting to your daily standing cap shouldn’t be a problem at all and if you only want to get Baruuk, you even don’t need to reach the highest rank, but only rank 3.

As said before, there are some great reasons to reach the highest rank in Vox Solaris, namely the Arcane Enhancements.

They are expensive, strong and hard to get, but it will be worth it. To raise through the ranks you not only need to get standings, but also be ready to sacrifice Credits and items:

You’re able to get the Toroids by simply doing the heists or by farming them directly.

Just follow our guide and you’re good to go!

The biggest problem will be the Gyromag Systems. Getting those requires you to run the heist missions over and over.

It is a common reward and will drop in fives, so you only need to get lucky three times.

You can either do the fourth heist (killing the Profit-Taker Orb) over and over, because you’re already farming for the standing. Or, if you already have enough standing, switch over to the second phase and repeat that mission until you’ve got what you needed.

Phase Two only takes about 30 to 60 seconds per run, so you can farm it pretty fast. Now you just need to get lucky.

You can also trade Vox Solaris standing for Gyromag Systems (as well as for Atmo Systems and Repeller Systems), but it costs a lot of standing.

And it will slow your ranking-up-progress.

The Atmo Systems are an uncommon reward, drop in fours and you’ll need to get lucky again. Just run your favorite heist phase until you have what you need or trade them for Vox Solaris standing if you can’t get yourself to farm the same mission over and over.

You can get three Repeller Systems as a rare reward from any heist mission, so you need to run those again and again.

If you find yourself having trouble with the Credits part, maybe quickly head over to The Index and do some runs there.

A lot of credits, a big chunk of standing, Repeller Systems again plus five Crisma Toroids – you’re going to need to grind through the heists a lot if you want to reach the highest rank in Vox Solaris.

Don’t give up, make sure to get your daily cap done and just keep on playing until you’ve gotten where you wanted to go.

Don’t forget that you need to be in operator mode if you want to talk to Little Duck, otherwise he won’t talk to you.

Also, always keep enough Toroids around so you can exactly trade the amount of Toroids to reach your exact daily cap.

Other than that, grinding through the content can become boring after a while. If you find yourself bored with that, just stop for a few days, explore other Warframe content and come back later.

If you already have enough Toroids, you don’t even need to keep on farming them for a few days!