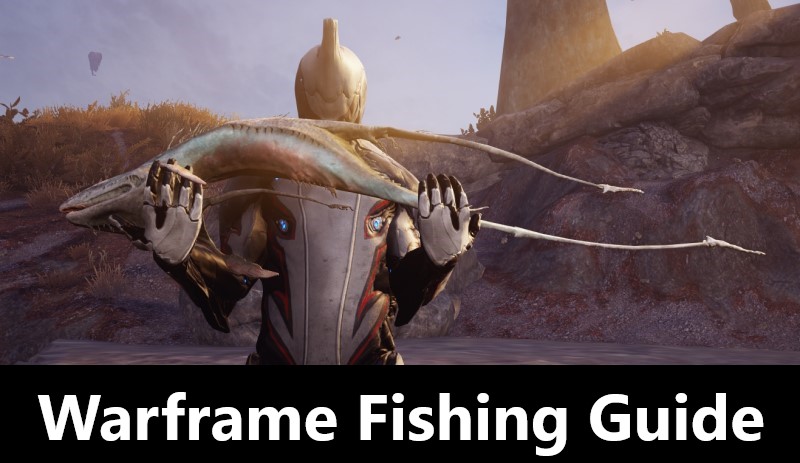 A lot of Warframe has to do with killing enemies and going against various factions in space, but there are also non-violent things to do in the game, such as fishing (or at least less violent!)

This was introduced after the Plains of Eidolon were created, and then when Orb Vallis arrived, there were different fish species to go for.

You can go to these open worlds and search the inland or surrounding waters to look for fish. Both fish and servofish have uses which include making them into provisions or using them as a trophy.

How To Fish in Warframe?

You can buy a fishing spear with standing in Fortuna or Cetus. You might also get one when you reach a higher level.

To catch fish, equip the fishing spear when you’re close to deep enough water, and wait until you see some fish there. Aim the spear at a fish and throw it using your primary attack button.

If you hit the fish it will inflict damage and probably mean a catch. It might mean a guaranteed catch depending on the spear you have.

It’s good to collect all the spears in the collection since they work slightly differently.

Were Can You Buy Fishing Spears?

You can get fishing spears in Fortuna or Cetus. Hai-Luk in Cetus carries three different kids. This NPC carries more traditional ones along with other fishing equipment.

The NPC called The Business on Fortuna has higher-tech spears than Hai-Luk. There are two which were introduced when fishing came to Orb Vallis.

Every spear is stronger against a specific type of fish, which means there is no ‘best’ fishing spear. Servofish are easy to catch with the Fortuna fishing spears.

Let’s take a look at some of the different kinds of spears available:

How To Use Dye and Fishing Bait?

Craft bait by buying their blueprints from the shops. Bait is used to attract the more rare fish species.

These might have parts you need later in the game or they might be of higher value.

You must equip bait in your gear before going to an open world, and then toss it after choosing the fishing spear you are going to use.

Some fish require you to use a specific type of bait, and this means you need to catch various common fish in order to make the higher level baits.

Luminous dye can virtually highlight the fish in the water to reveal their location. This makes them easier to catch.

Pharoma is a fish-calming compound which also makes them easier to capture, even if you already attempted to catch them before. Rarer types of fish will need to be lured with special baits.

How To Use Fish in Warframe?

There are a number of uses for Warframe fish. They can feed Fortuna or Cetus inhabitants, they can be displayed as a trophy, they can be processed, or you can keep them in the orbiter fish tank.

You can exchange them for resources needed for future crafting, or swap them for standing in one of the open world towns.

This applies to servofish as well as regular fish.

Alternatively you can mount fish on wall trophies, as long as you buy the trophy mount first from The Business on Fortuna or Hai-Luk on Cetus.

You can display servofish as well as fish on a wall-mounted trophy.

You can provide fish to feed Cetus’ inhabitants. In return for fish donation you will get Ostron Standing which can be used when buying from Cetus’ NPCs.

Do this by going to Hai-Luk and choosing ‘Provide Fish’. The size and type of fish you donate determines how much Ostron Standing you get as a reward.

Cutting your fish lets you collect various parts from different types of fish. When you choose the ‘Cut Fish’ option in Hai-Luk, the fish is removed and instead you get fish meat, fish scales and fish oil, as well as a specific fish part depending which fish type you cut up.

The type of fish chosen determines which bonus parts you get and the size determines how much meat, scales and oil you get.

Different kinds of fish give different amounts of these. Although you can choose multiple fish, the resource amount is fixed according to fish type.

Hand servofish to The Business on Fortuna to those needing the parts. This rewards you with Solaris United Standing which you can then use to buy items from Fortuna NPCs.

You can also select ‘Provide Servofish’ from The Business’ menu to feed the Fortuna inhabitants. You will get Solaris United Standing for doing this, with the amount depending on the size and type of fish given.

Another option is to dismantle servofish by clickin on ‘Dismantle Servofish’ at The Business. You will get Scrap from the fish along with a specific part according to the type of servofish dismantled.

All servofish give you Scrap when dismantled, but the amount depends on the size and type of fish.

You can fish on two planets in the game at the moment. You can catch servofish in Orb Vallis on Venus, or fish in the Plains of Eidolon on Earth.

Each type of fish or servofish offer different resources, and sometimes the time of day and biomes need to be correct in order for a successful capture.

The Plains of Eidolon fish are more organic than the Venus ones, and you can typically catch these even with a basic spear.

These fish are used for their meat, scales and oil. As you work your way through Cetus in the game, you will have to farm some fish oil to be able to craft most of the equipment you get in Cetus.

The fish found on Venus are mechanical ones known as servofish. They are used to get Scrap and for their parts.

There are fishing hotspots in both Orb Vallis and the Plains of Eidolon where you will be luckier with fishing.

You might see that the fish aren’t spawning but this can mean you’re trying to rush things. Just wait a bit and consider using dye to reveal the location of the fish.

You may fish in lakes, the outer waters or ponds in the Plains of Eidolon on Cetus, or the lakes, ponds and fishing caves in the Orb Vallis on Fortuna.

What is the Fishing Boot?

Occasionally you might catch a boot when you’re fishing. You can get a Crewmen’s Boot in Orb Vallis or a regular Boot in the Plains of Eidolon.

If you want to deliberately get a boot, you can equip any of the fishing spears and use it without aiming for a fish, or fish somewhere empty.

A different tune plays whenever you get a boot. You can even buy a mount and use the boot for decoration.

This is mostly just for a joke, rather than serving any real purpose in Warframe.

Fishing can be useful when playing Warframe, since you need to fish to create crafting equipment later on in the game. Y

ou should ensure you collect all the fishing spears and create bait and luminous dye.

A lot of players don’t use Pharoma although it can result in a slightly easier experience when fishing because the fish stay in the same place.

You can also catch large numbers of fish in one session by farming in free roams. This makes it easier to farm resources from fish such as fish oil.

So fish in Warframe are both useful and decorative, depending what you choose to do with them.