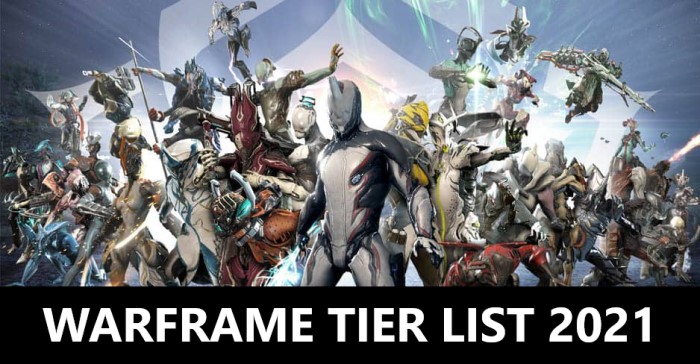 Warframe is a great online game which is free to play. It has quite a steep learning curve though, and you can’t really skip any of the systems on top of systems knowhow or you are putting yourself at a disadvantage.

There are also many different warframes to choose from, which come with a unique set of skills.

To make it simpler to get used to them, you might want to look at them as characters, such as in a MOBA.

Right now there are 45 warframes to choose from, along with the stronger Prime ones, and there are more coming.

Some are of course superior to others. When picking which warframe you want, bear three things in mind:

Let’s take a look at 15 warframes which excel in one or more of those categories:

The only weakness Limbo has is Nullifiers that cancel out the skills of other warframes. These are easy to work with and make him unbeatable because of his Rift mechanics.

Limbo can stop projectiles mid-flight. It’s quite simple to get him a sustainable energy pool, and then when you team that with his range, efficiency and high skill duration, he’s a strong and useful killing machine.

Trinity, who is also known as the War Goddess in the game, has infinite energy, meaning enemies can waste their abilities trying to kill her. She’s also a support frame because of this.

Trinity can link her health with an enemy so they get the damage that should have been done to her. She can survive even the strongest attacks.

Although Inaros is possibly the strongest warframe, Nidus is the most resilient. However high level his enemies might be, Nidus is just about un-killable.

He has the mechanic of Mutation to stack up to a hundred. Whenever he dies he can come back to life right away using 15 Mutation stacks.

It’s easy to get Mutation stacks so you can keep him alive for as long as possible.

This might be the simplest warframe for beginners, but it’s still a good pick. You might get this one for free depending who you select in the tutorial, else you can get Excalibur Umbra free in a later quest, and that one is stronger.

Excalibur is a great DPS warframe since he has an Exalted Blade skill. In addition he has Radial Blind to stun enemies briefly, and that’s a useful crowd control panic button.

Excalibur has 2 mods which are quite simple to get. He has a Chromatic Blade and also Condition Overload on the Exalted Blade.

These help to make him victorious in the endgame content.

Gauss is a great damage and utility frame. He is a good choice if you’re in a hurry to progress through the game and you want to complete every mission in the quickest way you can to make the most of your time or expand your skills as a Warframe player.

He is the quickest warframe because of his second skill, even compared to Volt.

His speed skill is consistent and unparalleled.

His other skills are worthy too, and include wiping out all enemies in a 360 degree radius and mitigating projectile damages.

This rather complex warframe has Day and Night Form dynamics, which can take a while to master.

However, choose Equinox and you will have one of the best endgame-scaling frames available.

Equinox is able to put enemies to sleep then kill them to get affinity. This makes solo affinity farming easy. Her final skill is she can make enemies bleed to death.

This is based on a percentage calculation so will work on any level of enemies.

Changing to another form makes Equinox a healer for all the team, so she is a valuable warframe to pick.

Nekros has a third skill of Desecrate, which makes him a great choice. It makes any dead enemy hand over their loot.

Although it’s based on a set percentage, it roughly doubles your look and also increases the odds of you finding mods or rare items. Nekros is a great way to get plenty of Warframe Platinum.

Ivara’s permanent invisibility makes her top tier. She is ranger themed and uses a bow. Her skill is Artemis Bow, which lets her shoot multiple arrows from a bow.

This bow causes a lot of damage regardless of the level of the enemy.

Ivara has other skills including crowd control, which paired with her constant invisibility, makes her very strong in the game, and a great choice for solo endless survival modes.

Inaros doesn’t tend to rely on his skills, but he is still a good choice. The shrugs off attacks seemingly with very little effort, compared to most other warframes.

His ability gets a lot of armor, although he can still get damage to health.

Use Dessication, another of his skills, to recover his health at warp speed. This stuns and blinds enemies with sand. If they die, a lot of Inaros’ health will be topped up.

He is quite hard to kill.

Saryn is a nice DPS frame and likely the best at damaging all enemies within about 50 meters. She can wipe them out before they’re even in your line of sight.

Her first skill is Spores which not only inflicts damage to enemies, but also spreads to others, stripping their armor.

Toxic Lash and Miasma are other skills Saryn has, and these can help erase any enemy on the map when they spawn.

She isn’t so good at surviving compared to other warframes, but her Molt skill draws enemy fire and can be modded to bring her health back up.

If you want to have fun with weapons instead of go for the warframe with the strongest killing ability, you might like to consider Rhino or the Rhino Prime variant (which is similar but stronger and more edgy).

You will be able to do that without the fear of dying. Rhino has a number of useful skills, but his Iron Skin makes him especially hard to kill.

He isn’t the best for Warframe’s hardest missions, but with the two mods of Iron Shrapnel and Ironclad Charge, he has a lot of health and can put up a good fight.

Send him into a crowd of enemies using Rhino Charge and then immediately activate Iron Skin. You will get between 10,000 and 300,000 extra armor depending how many enemies you can hit.

Octavia has a wide selection of skills and plenty of power. She can survive damage and draw enemy fire.

She also has the skill of infinite invisibility and this can be shared with three other members or the team.

She is much stronger than Loki because she can be invisible all the time and still cause plenty of damage.

Nova is able to kill any enemy she sees. Her ultimate skill is Molecular Prime.

This can make enemies slower or faster, or can inflict double the damage on them, depending on how you mod this skill.

Nova is a lot more likely to survive than Saryn, since her first skill is Null Star, giving her up to 90% reduction in damage. She can survive any attack using the Molecular Prime field.

This is a more active and quicker version of Rhino. The skill is also similar. Nezha has Warding Halo, which means he has a lot of armor and makes him hard to kill.

He also has the Firewalker skill which damages and stuns enemies stepping on his trail of fire, and this gives him a boost in speed too.

Another skill Nezha has is Blazing Chakram, which gives infinite healing orbs to rapidly recover health. Divine Spears, another skill, can incapacitate a lot of enemies at once and is also good for crowd control.

Our Winner!! Mesa or Mesa Prime is unbeatable in terms of DPS.

This is because of Peacemaker, her ultimate skill, which will kill any enemy approaching regardless of their level.

Mesa can also go in a survival frame or tank category, thanks to her Shooting Gallery skill that stuns enemies and disables their ranged weapons when they are close.

In addition, Mesa’s Shatter Shield reduces the amount of damage she takes. She is a mean killing machine thanks to this range of skills.