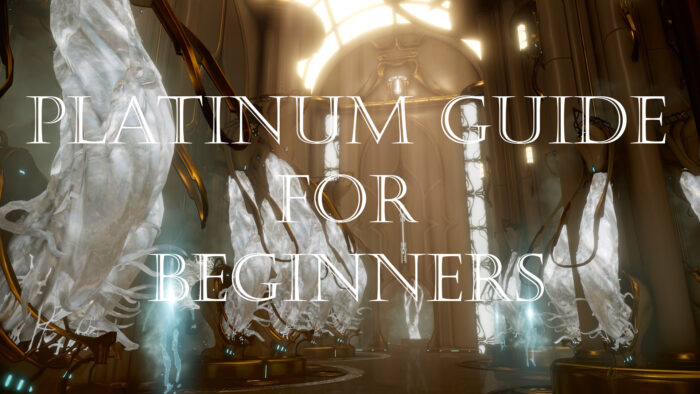 Since Platinum is the only ingame currency in Warframe that can be bought with real money, spending it if you only have a small amount is somewhat tricky.

Of course you want to buy a lot of new Warframes and weapons, but there are also boosters, cosmetic items and way more stuff.

Especially beginners feel overwhelmed when they have to decide where to spend the first few Platinum.

Even if you bought some with an discount for real money, unless you start trading you probably won’t have so much Platinum that you don’t know what to do with it.

So spending your Platinum wisely is really important. But what items are worth buying and where should you wait until later into to the game?

The more Platinum you invest, the more you get out of it. For example: If you use it to buy yourself a strong weapon, you can quicker walk through the different missions, get better Warframes and more resources.

But if you use it to buy a really strong Warframe that is used in a lot of different mission types, you can probably get even more out of it.

But most Warframes are somewhat easy to farm, so buying those is a “waste” of your currency.

Here are the most profitable Platinum investments a beginner can make in Warframe.

You will need a lot of those. 20 Platinum will get you one Warframe slot and since there are currently more than 50 Warframes in the game, you will need to invest quite some amount of Platinum.

Weapon slots are a bit cheaper (12 Plat will get you two slots!), but you still probably need to use some hundred Platinum just for weapon slots.

Buying these is really the only part in Warframe where you have to spend the premium currency.

If you have some extra Platinum and you know you are going to spend the next few days playing the game, buying a booster is very effective.

If you have a lot of Platinum, go ahead and buy the 30-days-booster, since it will provide the best price-performance ration.

Especially if you are going to do some credit farming or resource farming, having the proper booster will help you out a lot.

Yeah yeah, there will be random alerts giving you an Exilus Adapter blueprint. But if you don’t have those and want to min-max your Warframe, go ahead and invest the Platinum.

Waiting for another alert isn’t worth it and the Exilus Adapter might help to optimize your build.

If you start breeding your own Kavats (a cat-like companion) you will need a lot of Kavat Genetic Code. Farming that is a hassle and not really worth it.

Buy yourself some Kavat Genetic Code (or even the Kavat Starter Kit) and save yourself time and sanity.

Once you decided to pick your two Syndicates, switching to another one isn’t really necessary or recommended.

If you want to raise your Mastery Rank or just want to get a special augmented mod for one of your Warframes you can use your Platinum to buy these things from other players.

By the way: You can also sell mods and weapons from your Syndicate to another player and make some Platinum while doing so!

Other Ways to Spend Platinum

Some Warframes are really hard and boring to farm (looking at you, Nidus and Khora!) and a lot of Primed Warframes are currently not farmable and need to be bought from other trades if you really want them.

So using your Platinum to save yourself a lot of time is absolutely a wise decision.

The same is true for weapons.

Some of them are somewhat stressful to farm and some primed weapons aren’t in the current rotation anymore.

Buying a new landing craft doesn’t have any impact on the game, but farming those items is just super frustrating.

So if you want to get a new space ship, go ahead and buy it from the shop – it’s totally worth it!

Getting new skins and colors for your weapons, Warframes and your ship is why a lot of people still keep coming back to Warframe.

So treating yourself to a new fashionframe item if you have enough Platinum lying around is a great way to motivate yourself.

What To Never Buy With Platinum

So there are some traps inside the ingame shop and investing your Platinum into some stuff is just a waste of your ingame currency (and money).

In the end you are free to spend your Platinum on whatever you want, but using it in the most efficient way during the first few (hundred) hours is probably a good idea.

If you want to know how you can get more Platinum feel free to take a look at our Platinum farming guide!

It will probably help you to progress faster through the early and mid game and will give you good points to start from.