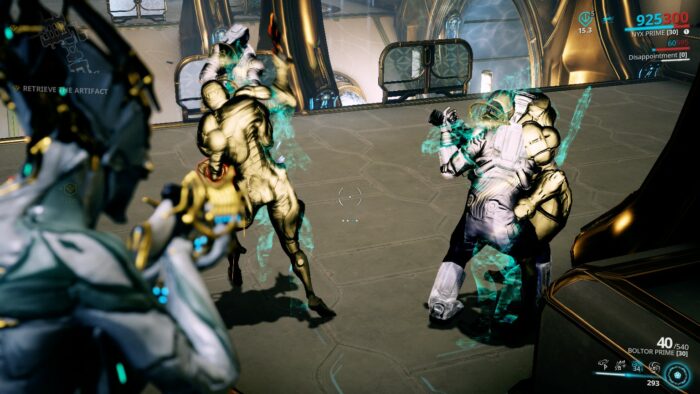 Warframe and Digital Extreme always have been keen to promote Crowd Control (‘CC’) as an important part of the game – at least that’s the feeling you do get as a new player. Mag and Volt both have abilities with CC and while they ALSO deal a good amount of damage, two of three choices you can make at the start of the game do suggest that crowd control does have a big impact in the game. But as you progress through the game it becomes more and more clear that CC isn’t the way to go. Instead you either pick one of the meta support Warframes or you just try to burst everything down as fast as possible.

It really feels like crowd control is not the way to go. And that’s not only because the current Warframe meta doesn’t allow it, but because of design choices Digital Extreme made in the last few years. It’s confusing and to be honest annoying to have a lot of CC in the game and then get more and more reasons not to use it.

Is Crowd Control really an important part of the game?

To be fair, it wouldn’t make much sense to complain about decisions and design if crowd control would simply be not an important part of Warframe. One could argue that you would enjoy the game more if it became more important and everything would be fine. But that is simply not the case. Here are a few Warframes that heavily rely on crowd control:

And there are way more examples in the game. Zephyr, Equinox, Rhino and Frost are just a few other examples. Some Warframes even get augmented mods to give them crowd control (Ember’s ‘World On Fire’ got Firequake, Atlas‘ ‘Landslide’ got Path of Statues, etc.). There is an argument to be made that almost every Warframe has some form of crowd control. So it at least SEEMS like Digital Extreme enjoys putting more and more crowd-control-abilities into the game, while also making them super useless with their design decisions.

Why is Crowd Control so useless?

This question contains two important parts: Why should you not pick a CC Warframe most of the time and why does Digital Extreme keep on pushing crowd control away from the game? Let’s start with the first one, because it’s easy to answer.

Crowd control is simply a bad choice because you are usually not encouraged to use it. Lets take a look at all the game modes that encourage you to pick a damage or healing Warframe over CC:

So what mission types really benefit from you using a Warframe with crowd control? There aren’t many and the only one you ‘really’ want some CC is Interception. There is an argument to be made about CC in high mobile defense missions (Sorties, Axi) or in certain Assassination nodes if you aren’t able to be fast enough in killing the boss. Sometimes CC can be good in Excavation missions (e.g. if you are going against The Infested and you’re using a Vauban), but most of the times you rather nuke everything or protect the Excavators with your Frost or Limbo. So there aren’t really a lot of situations where you need pure CC. Or any CC at all.

Another big part of why controlling the battlefield feels super useless are Nullifier. Of course there should be some sort of counter play to strong abilities, but Nullifier feel just super bad. “Oh, you managed to successfully reach an enemy level with your defense group, where one shot will instantly kill you? Well, let me spawn a Nullifier right into your Frost’s globe and let’s roll the dice.” /rant.

That’s a question we can’t answer with certainty, because it’s unclear if the design decisions and the current meta is really forced by Digital Extreme or if they simply aren’t aware of the problem. Putting more and more CC abilities in the game suggests that they do like crowd control and that they don’t want to purge it or discourage the use in any form. But sadly if you do compare it with the current development in new mission types, CC simply feels useless.

A good reason why Digital Extreme doesn’t focus more and more on missions for crowd control is that CC isn’t fun for a lot of people. If you are new to the game there are high chances that you rather have new missions and Warframes where you can shoot stuff, let enemies explode and have fireworks on your screen while doing so. Crowd Control isn’t flashy, it doesn’t feel overpowered (even though it might be) and killing mob groups or big enemies is simply more satisfying than letting stuff live and not kill it.

Another point that often is forgotten is the fact that balancing crowd control is super hard. If a Warframe deals too much damage it’s not a big deal, because “too much damage” is quite relative in Warframe. And it also feels good to nuke everything. But balancing CC requires the right amount of range, duration, energy channel cost, combined with a unique and fun-to-use effect. And if a CC Warframe is too strong, it certainly can and will break the meta. So maybe DE is simply afraid of making CC more important, especially in regards to all the CC skills that are already in the game.

Why do we need better crowd control mechanics?

To be fair, this topic isn’t new. People are complaining about the weak skill set of Nyx and Vauban for a long time. Do you remember when Loki’s Disarm used to be good? Then you must be following Warframe for a pretty long time. So it”s been years and years, but to this day there are usually just ‘bandage solutions’ and more useless CC, but no good reworks or even new mission types in regards to crowd control. So why is useless crowd control sad and bad for Warframe?

Because it limits the fun we all could be having right now. Imagine a good mission type, where you really need a good CC Warframe. Something like Arbitration, but CC would be useful. Or something totally different. Heck, just give me the option to play a Freeze-Frost or a Stomping-Rhino and not feel like I am useless all the time.

Being able to use more Warframes in the game will also benefit Digital Extreme greatly. New players (and even players with hundreds of hours into the game) use YouTube to find out what Warframe is “worth to use” – and a lot simply aren’t worth it. So a lot of people don’t farm Nyx, Mag or Vauban. Not because they are super hard to farm (well, Vauban Prime anyone?), but because it’s not worth their time. They rather spent their time doing something else and often times playing something else. More viable Warframes means more actual game time spend in the game and relates into more Platinum and real money invested.

So what is the solution?

There is no easy solution to this problem and we all know that. Yes, a new game mode would be nice. But it would just be another bandage solution. Yes, ten new game modes would also be nice, but that wouldn’t solve the problems mentioned above. Changing stuff needs work and time and that’s time not spend on new missions, new open worlds, new alerts and new Warframes.

Digital Extreme said before that people rather have new stuff than fixes for old stuff – and they are not wrong. New content is more exciting and way more fun than balance changes for old Warframes, weapons and enemies. So we’re all to blame. At least for some parts of it. And if really want changes made on older content, we need to be patient and signal that to the developers.

Because the only real solution to the problem are balance changes. A lot. And they not only concern CC Warframes and their abilities, but also every other Warframe in the game. Making Mesa, Saryn, Volt, Equinox and all other super strong nuke-frames weaker will raise the importance of crowd control and simultaneously strengthen supports. Because right now Warframes like Oberon, Garuda or Harrow are niche at best, simply because heal isn’t really needed in most of the content. But that is a story for another time.