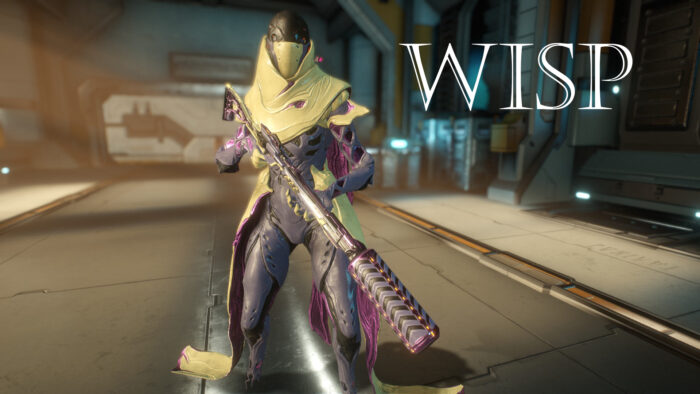 Wisp is the 40th Warframe of the game and was added together with a new assassination target as well as an overhaul of Jupiter.

She is mainly seen as a support Warframes due to her abilities, but can also be played in a more DPS oriented way, which does resemble the way you can play Oberon.

But not only is she somewhat similar to Oberon in they way her abilities come together, but also in the way they look: Especially her first ability looks like a nice addition to every Hollowed Ground build.

But she is by no means just a copy of Oberon. Instead she brings her own, very unique skill set and a very interesting passive ability, which let’s her become invisible while being airborne.

If you want to know how you can get your hands on all the blueprints needed to craft her, you might want to take a look at our guide.

If you’re looking for some good ideas on how to build your Wisp, you came to the right place! Let’s start!

Even though Wisp is mainly seen as a support Warframe you are always free to explore other options and builds as well.

While she shines with her utility she can also deal huge amounts of damage due to her strong fourth ability.

You don’t really want or need to change the aura polarity and keep the Naramon version, simply because you want to use either Energy Siphon for more caster related builds where you spam your abilities more or to pick Corrosive Projection to reduce enemy armor.

You should also know that the builds displayed here are just a guideline and need to be changed depending on the missions you plan to bring the Warframe to, your group composition as well as personal preferences.

So see our builds just as a start from where on you shape your personal build even further!

Tip: If you want to know more about Wisp and her abilities, feel free to take a look at the wikia page.

This build tries to enable you to use all your abilities with at least some success and combines the power of your supportive skills with your offensive skills.

You do want to get a good amount of ability strength to boost your first and fourth skill and combine it with some range and duration.

Efficiency is usually your main problem with this build, but Hunter Adrenaline works really great. You also don’t usually need to spam your abilities, but rather use them when needed.

Especially your ultimate skill ‘Sol Gate’ should only be used if you have enough energy for a few seconds or if you just want to quickly kill larger groups of enemies.

If you rather have more efficiency, you can always switch out Streamline or Stretch for Fleeting Expertise.

While Blind Rage takes a great amount of efficiency away from this build, you really want to get the higher ability strength for the better heal and higher damage output.

Reducing your duration or range will negatively influence your second and third skill, but if you don’t see yourself using them all that often you shouldn’t have any trouble with that.

The best choice for your Exilus Adapter mod slot really depends on your own preferences and can be changes as you please. If you want to be faster, bring Rush. If you rather have more ability range, pick Cunning Drift.

More energy regeneration? Think about bringing Coaction Drift. Handspring and even Enemy Sense could also be used, depending on what you want and need.

This build fully revolves around your first ability ‘Reservoirs’ and tries to improve the buffs you do get from your motes.

Especially the Vitality Mote is super strong here and will not only increase your and your allies health pool by over 900 points, but also shine with a high healing rate.

The Haste Mote is also pretty strong and does increase your fire rate and speed by a lot, while the Shock Mote is still okay, but won’t be optimal due to the lower ability range.

If you don’t have Umbral Intensify and Umbral Vitality, just pick the normal versions of those mods and you will still get a very good result.

Cunning Drift and Stretch are more of a quality-of-life addition and will increase the pick-up radius of your buffs as well as increase the range for your Shock Mote.

Trying to get the best build for your ultimate ability ‘Sol Gate’ feels like a little bit of a problem, because you do want to have a high damage output, but you also need to balance range and efficiency for that.

Especially the energy drain is a really big problem, which is why this build doesn’t use Blind Rage. Even without that mod you still have a drain of more than seven energy per second and unless you do have a Trinity in your group, you’re going to get some energy problems.

Also don’t forget to use your first skill and place all three motes to increase your damage output.

Vitality and Shock will each increase your damage output with your Sol Gate by 25% (so 50% in total), while the Haste Mote allows your ability to deal corrosive damage procs (but it doesn’t add corrosive damage to your skill!).

If you want to increase your damage output for a few seconds, press the left mouse button. This will increase the gate and beam size and also multiply the DPS by a lot.

It also increases the energy drain, so be careful and always have an eye on your energy pool. Don’t forget that you can use abilities while Sol Gate is active.

You can also move, dash and ‘run’, but you’re not able to jump or combat roll.

This build tries to abuse the power of your Shock Mote and combine it with the great crowd control of your ‘Breach Surge’ skill.

While the first one will directly stun up to five targets, your third ability will instead blind your enemies for a good amount of time, so get some additional duration.

Those blinded enemies can be attacked for higher damage due to the fact that they are susceptible to the stealth damage bonus, but they can’t be killed with melee finishers, so keep that in mind.

You can also use your Breach Surge while your ‘Wil-O-Wisp’ is active and get a second activation on your clone.

You can also spread your motes around the map and use your third skill to directly teleport to those as long as you have line of sight.

This will also increase the range of your ability for that activation!

The build itself should be self-explanatory: You want a lot of range, some duration (for a longer blinding debuff and a longer Shock Mote buff) as well as some ability strength so you can use your other motes, too.

The 40th Warframe is a really well balanced addition to the game and can work as a great buffer, a solid damage dealer and even satisfy with crowd control mechanics.

There are a lot of different ways how you could play Wisp and in the end it always comes down to your own preferences and your personal play style.

Just make sure to understand the synergies between the different abilities and you will be good to go!

If you think we missed a great build idea or some important information, feel free to leave us a comment!