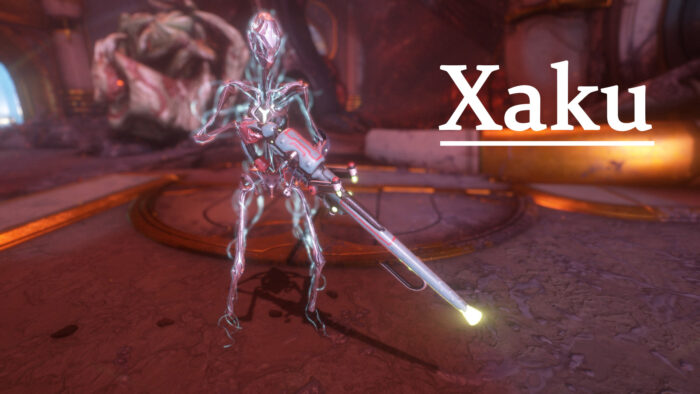 As a community-made Warframe, Xaku features a set of fairly unique abilities.

They are also known as the ‘Broken Warframe’, since they were made out of three different Warframes, coming together into this amalgamation.

Due to that fact Xaku doesn’t have a distinctive sex, so they’re usually referred to as ‘them’ or ‘they’.

The Warframe itself was introduced together with the ‘Heart of Deimos’ update and if you don’t already figured out how to get all the blueprints needed, head over to our guide on how to get Xaku.

If you’re looking for some ideas on how to build the Warframe, you found the right guide!

The innate Naramon polarity inside the aura mod slot is already the best you can hope for, giving you easy access to either Corrosive Projection or Energy Siphon.

If you want to switch to Steel Charge or one of the other aura mods, we highly recommend to use an Aura Forma, giving you more flexibility.

Depending on your favorite build with Xaku, you might end up using four to six Forma to complete your builds, so be ready to farm a lot of affinity during that time.

Especially if you like to test out different mod compositions, you will end up with having extra drain on your mods due to not suitable polarities.

In those circumstances try and use the mod with the lowest drain in those slots to minimize the penalty.

Tip: If you want to know more about Xaku and their ability, feel free to to take a look at the wikia page.

This build tries to utilize the fourth ability ‘The Vast Untime‘ to increase your damage output with your melee weapon.

The idea is fairly simple: While Xaku already has an innate 25% passive dodge chance for incoming projectiles, your ultimate ability increases this stat to 75% – realistically giving you a very high amount of damage reduction.

While the dodge chance won’t apply to melee attacks or explosions, most incoming damage will be from projectiles flying towards you.

The build itself focuses on a combination of long duration and efficiency while also increasing your survivability – in melee range you’re usually more prone to get hit by melee attacks.

If you’re bringing this build against higher level enemies, you could switch Augur Message for Hunter Adrenaline to get a little bit more energy recovery.

It is also important to note that this build allows you to have your first ability (Xata’s Whisper) up, which synergizes well with your ultimate ability, especially if you don’t have the range penalty from Narrow Minded.

If you’re using Condition Overload in your melee weapon build, it will also add void damage to your weapon.

Your third ability, called ‘The Lost‘, unites three skills in itself, allowing you to circle through them by tapping the skill key, while holding the key will use the ability.

This build allows you to use all three abilities to some success, but centers on the first one: ‘Accuse‘ places a void rift and converts up to 19 affected enemy units inside it to fight for your side.

While you can still kill all affected units, you can basically use this skill to defend any defense target.

A good amount of ability strength is needed to increase the amount of enemy mobs affected, but you don’t want to sacrifice too much of your duration, so using Transient Fortitude isn’t really where you want to be.

A good range is also important or otherwise you might not hit the maximum amount of enemies.

You might also pick Energy Siphon instead of Corrosive Projection and switch out Primed Flow for Streamline or even Fleeting Expertise if you’re finding yourself having energy problems too often.

If you like more experimental builds, we do have the right idea for you: This build abuses the nuke of your fourth ability, killing every (low level) enemy in sight.

If an enemy did survive the initial blast, finish them off with your ‘Deny‘ ability.

Don’t forget that the nuke will only hit enemies with line-of-sight, so if you can’t see the enemy on your screen, you won’t hit them with your nuke.

The build itself is fairly straight forward, stacking ability strength for damage, some range, and efficiency.

You could even use Augur Secrets instead of Vitality if you don’t find yourself against high level enemies and want increase your damage output.

Xaku isn’t the most exciting Warframe in the history of the game, but they do feature an interesting skill set as well as some cool animations.

And with the right color scheme you can easily play as the Terminator, so that’s another plus.

If you’re missing a build or if you simply want to add your own ideas, feel free to leave us a comment below with all your input!