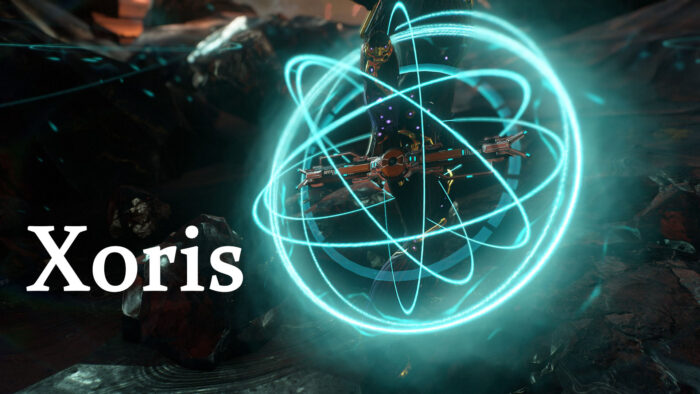 The Xoris is a melee weapon that was introduced with Update 28. The glaive has a fairly high attack speed, an infinite combo duration and can also be thrown at your enemies, which increases the range by quite a lot.

The weapon itself is also easy to get: Simply progress through the questline of ‘The Deadlock Protocol’ and you will get all parts needed to craft it.

The Xoris also plays a fairly important part for the Granum Void and in farming for Protea, so crafting and actually upgrading the glaive will benefit you a lot.

You can build the weapon in several ways, so keep on reading this guide if you want to find some ideas!

The biggest advantage of the Xoris is actually the infinite combo duration, which allows for some really strong builds most melee weapons might struggle with.

Mods like Blood Rush or Weeping Wounds will be super strong with this weapon and you even get a lot out of something like Gladiator Might and True Punishment.

In the end you have a lot of different builds you could try, but generally speaking you don’t want to go for a hybrid version (elemental + critical damage), but rather try and maximize the potential of the glaive.

If you found another working build, feel free to leave us a comment with your mod choices!

Here we try and get as much as possible out of the infinite combo counter duration. True Punishment has no negative impact on our build and Weeping Wounds will increase your status proc chance by a lot.

Since you already have IPS-damage on the weapon you gain a huge damage boost by simply using Condition Overload. We also add Virulent Scourge for some extra elemental damage and Voltaic Strike to get the Corrosive damage type.

You don’t necessarily to get Corrosive damage, but it’s always nice to have the armor reduction.

Another great mod to use is Relentless Combination, which will proc fairly often due to Weeping Wounds and the increased status chance from our two elemental mods.

You could also think about adding Primed Fever Strike instead of Virulent Scourge for some increased damage output as well as adding Primed Reach for True Punishment if you’re into more range.

You might even want to take a look at Healing Return if you are in need of some healing.

This build features another route and tries to maximize its damage output by increasing your critical chance and damage.

Blood Rush and Gladiator Might are great and the longer a mission goes on, the more likely you reach super high critical chances. Berserker is a good way to abuse the higher crit chance, giving you an attack speed boost buff.

If you do want to try some other mods, Primed Reach and Quickening are the first ones to come out. Potential candidates are True Punishment, Gladiator Rush (for more critical chance) or even Healing Return and/or Condition Overload, which are still decent with your innate IPS-damage.

You also don’t really need True Steel to get a lot of critical damage going, so you don’t need to use a mod slot on that.

Even though it takes a bit of time to really get the combo counter going, once you’ve managed to accumulate ten or more stacks, the Xoris will start to become ridiculously strong.

From here on out you want to make sure to survive (so pick a strong and tanky Warframe like Rhino or Inaros) and play as aggressive as you can.

You also don’t really ever want or need to throw the weapon, because it will be slower than just melee attacking.