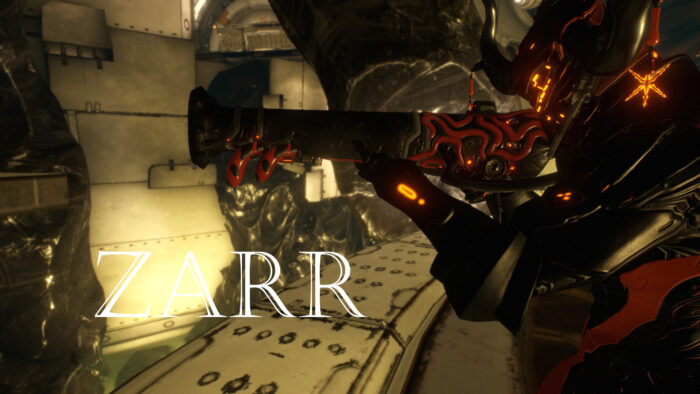 The Zarr does not only look like a big, mobile canon, but also does play like one: You can choose to either fire a single, explosive cannonball or switch to the barrage mode and kill your enemies with a shotgun.

While the Zarr does feature a shotgun mode, you will not be able to use shotgun mods but rather need to use rifle mods.

The Zarr itself is an okay-ish grenade launcher that deals innate Blast damage – which does bring some crowd control with it, if you can actually proc it.

Getting the Blast status chance to work can be pretty tough tough, because if you play with the barrage mode, the status chance is distributed on each shotgun pallet per shot – which means you really want to reach 100% status chance.

If you play with the cannon mode instead the status chance will still be distributed between each of your cannonball’s bomblets.

You also need to look out for self-damage if you choose to play mainly with the cannon mode, which can quickly become a big problem.

If you are looking for a solution for that (and for a great build to use), keep on reading our guide!

For our guide we will bring you two builds that revolve around the different fire modes.

While you probably will be able to find other builds for each of the fire modes as well, we focus on the standard builds you will end up with if you try to build around the different advantages of each fire mode.

The Zarr is somewhat special in the sense that the weapon is able to use the mod Firestorm as well as Adhesive Blast, with the latter being pretty useless.

Sticking grenades onto enemies might sound fun, but in the end there is no benefit to be gained here and you rather use the mod slot for something else.

Firestorm however is a great mod if you combine it with your cannon mode.

Let’s start this build with the easy-to-understand choices: Serration and Split Chamber are just standard mods you will use every time you are able to.

Vital Sense and Point Strike are used to increase the good critical damage even further and to allow you to kill enemies more easily.

And Heavy Strike is a great addition, because it will raise your damage by a lot without having a real drawback – the lower accuracy isn’t noticeable at all.

Cautious Shot is a must-have if you plan on using the cannon mode, simply because you eventually will kill enemies close to you and without the self-damage reduction you will kill yourself more than a couple of times.

Firestorm is actually a great addition and will help you with the increased explosion radius not only to kill more mobs, but also to spread your Blast damage and get more crowd control out of each shot.

The last mod slot is reserved for Primed Fast Hands (or the normal version of it), simply because with three shots per magazine you will be reloading a lot.

That said, picking something like Vigilante Armaments, Critical Delay or even Crash Course isn’t bad at all.

You could also think about skipping Primed Fast Hands and Firestorm and use Thermite Rounds and Rime Rounds instead to increase your chance to proc the Blast status up to 85,5%.

But generally speaking you don’t need to get that high of a chance to get enough procs to crowd control if needed.

The barrage mode is clearly inferior to the cannon mode.

This starts with the range, which is capped at ten meters for the shotgun fire mode, unless you use Terminal Velocity – which you absolutely should if you plan on mainly using the alternate fire mode.

You also need to reach 100% status chance, which means you will need to include all four 60% status chance mods. That will leave you with three more mod slots, which are reserved for Serration, Split Chamber and Heavy Caliber.

Those will add a decent amount of damage to each of your shots and are an auto-include.

You don’t necessarily have to go for Corrosive and Blast damage here, but especially Blast damage is great for it’s crowd control capabilities.

While the shotgun mode will (at least in theory) allow you to deal more damage to a single enemy with one shot, you will need to get pretty close in order to hit with your pellets.

So if you plan on playing the barrage mode, make sure to bring a tanky enough Warframe or otherwise you might find yourself in some trouble.

To be honest the Zarr isn’t a great weapon and not even a good grenade launcher. The damage output is okay, but especially high armor enemies will give you some problems.

But some people do like to approach the game with big and explosive weapons and those players can and will have a lot of fun playing the Zarr.

You need to give it some time and learn how to aim with the cannon mode, because the travel time and the bullet drop can sometimes be hard to predict.

But after a few missions you will get the hang of it. Blasting away enemies and their corpses will feel super nice, so give this weapon a try.

If you think you’ve found another great build or if we missed some important information, feel free to leave us a comment here.