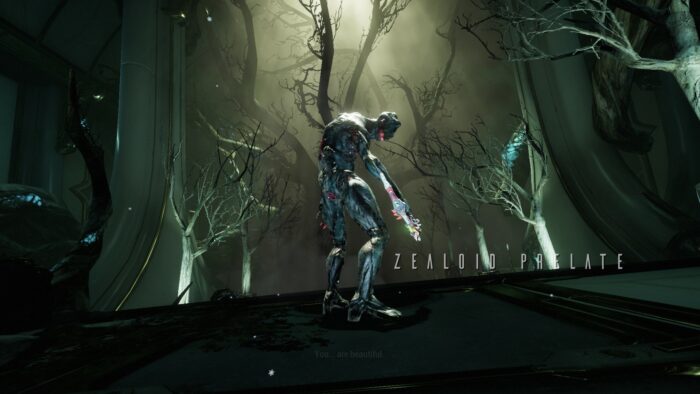 The Zealoid Prelate is a new Infested boss enemy that appears in an Emissary Derelict Assassinate mission and was introduced into the game during the fifth episode of Nightwave Series 2: The Emissary.

The boss comes with his unique signature weapon, the Pathocyst, which is an infested Glaive.

But the assassination target does not only drop the blueprint and weapon parts for the Pathocyst, but also rewards 1.500 standing towards the Emissary Nightwave syndicate.

If you played the video game Dark Sector before (the game was also made by Digital Extremes) you will see a strong resemblance between the Zealoid Prelate and the ‘Stinger’ enemies from that game.

This new boss enemy is also the first to feature a permanent health bar, which is shown on the HUD during the fight.

How To Defeat Zealoid Prelate

Before you are able to gain access to the special Emissary Derelict Assassinate node, you’ll need to get your hands on a Zealot Derelict Code.

If you don’t know how to get one of those, head over to our Infested Outbreak guide.

Each code grants you the ability to fight the Zealoid Prelate once, so you probably will need to gather a few codes before you’ll be able to get your hands on all three drops needed to craft the Pathocyst.

Once you do have a code, you need to find a planet with an active Infested Outbreak and check the Emissary node – there are different modes, so make sure you join the Assassination mission.

Once you’re inside the mission, simply head to the quest marker (you won’t see any enemies for now) and wait for the Zealoid Prelate to spawn.

Use whatever weapons and abilities you brought to attack it, which will result in a teleportation of your assassination target.

Follow the quest marker again and ignore all enemies you encounter – you can’t kill them anyway right now. Once you’ve found the Zealoid Prelate again, you basically have to repeat the following steps:

Now you need to find the Zealoid Bastion and the lamp again and repeat the phase until you’ve finally killed of the Infested boss.

Don’t forget to get the loot (there is even a chance for a Nitain Extract to drop) and head towards the extraction point.

As mentioned before the Zealoid Prelate will not only give you all the parts needed to craft the Pathocyst, but also drops mods and potentially resources.

Here are all the drops from the fight:

It is important to note that you are required to carry the lamp around if you’re playing alone, so you will need to bring your best secondary weapon in order to fight the boss.

If you however play with a random or premade group, you don’t necessarily have to carry the lamp – only one lamp will drop, which means only one Warframe can carry it.

Either way, we do recommend bringing something like the Akstiletto Prime or a good Kitgun to combat your enemies.

In regards to your Warframe pick, you probably want to bring one of the following picks:

Fighting the boss isn’t hard, getting enough codes to actually get into the mission can be fairly grindy – especially if you don’t have the time to log-in whenever there is a shift in Infested Outbreaks.

However, the new addition of a big healthbar showing on the screen looks pretty cool and hopefully it will be added to other boss fights as well.

Also important to note: For now it looks like you’ll only be able to fight the Zealoid Prelate until Nightwave Season 2 ends – which will be on October 13, 2019.

If and how he will make a comeback in the future is not known.

If you have some information to add, questions to ask or mistakes to point out, feel free to leave us a comment!