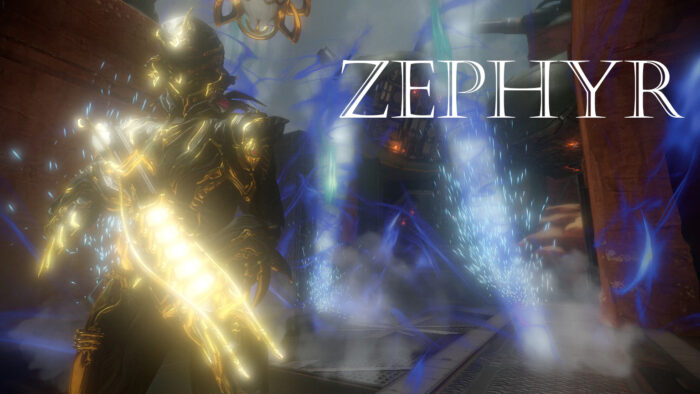 One of the more overlooked Warframes – and one that could definitively could need some buffs or a whole rework – is the light-footed Zephyr.

She does have a unique skill set that got slightly more relevant with the open world maps, but is usually considered not very strong.

The main problem is simply her damage scaling and the fact that all her abilities are not really in a great place for the current meta.

That said, there are still some moments where Zephyr can shine, especially thanks to her ability to combine crowd control with some decent damage output.

It is also possible to abuse the tank ability ‘Turbulence’ together with Zephyr’s higher shields and health pool. In the end it is up to you to decide if you want to give Zephyr a shot and if you will be able to have fun while playing her only depends on your personal play style and preferences.

If you are looking to get her, you can simply head into your dojo and get the necessary blueprints there – as long as you’re done with the needed research.

Honestly, building Zephyr isn’t easy at all. Especially if you want to try out different builds you need to find the right polarities early on and invest at least four to five Forma to achieve a full build.

But if you are able to do that properly you can chose whatever mods you want and get several different, but still usable builds.

For the aura polarity slot you don’t really need to think a lot, because you either want Energy Siphon for some extra energy regeneration or pick Corrosive Projection on higher level missions.

So bringing a Naramon polarity will always be the save and best choice here. You don’t necessarily need to choose Energy Siphon (especially if you do use Zenurik as your focus school), but for your caster builds (where you really need energy to cast your spells on time) it is very beneficial.

It is only naturally to try and find a build that mainly focuses on Zephyr’s ultimate ability, called ‘Tornado’. The ability itself will create four tornadoes that will pick up enemies in their way, damage them and lift them into the air.

So it is a good combination of damage and crowd control, but sadly you can’t really control the movement of your tornadoes, so there is also a RNG component involved.

If you use the augmented mod Funnel Clouds, you get eight tornadoes instead, but they are smaller and they don’t offer crowd control, which is why we’re not going to use it in this build.

Another tip: If you use your second ability ‘Airbust’ on a tornado you can increase the radius of said tornado.

You really want to get a good amount of duration, which is why this version uses Narrow Minded and Constitution as well as Primed Continuity.

Vitality will increase your already good health pool even further and Hunter Adrenaline is a great mod to make sure you’ll always be able to cast all your abilities as needed.

Stretch helps by increasing the radius of your tornadoes and if you are able to fit in a maxed out Umbral Intensify, do that. Otherwise just use the normal Intensify mod.

This build does feel very strong against groups of lower level enemies, because you will be able to one-shot them due to the area-of-effect damage your second ability ‘Airbust’ can deal to those groups.

But once the enemies start to hit higher levels and you need more than one or two shots of your Airbust skill, you don’t really want to bring this build anymore.

Efficiency and energy is really a problem, because Blind Rage does really reduce your ability efficiency by a lot. Without it you do sacrifice 99% damage increase, which wouldn’t be a good idea on a nuke build.

To counter-act the efficiency loss from Blind Rage, you do need to get Streamline, Fleeting Expertise and Primed Flow (or its normal version) to get as much energy as possible to spam your skill.

You might consider using Hunter Adrenaline instead to gain a little bit more energy. Or use Stretch to increase the explosion radius of your ability.

It does create a shield around your Warframe that will redirect all incoming projectiles, which is useless against the Infested, but very strong against Grineer and Corpus units.

You really want to use the augmented mod Jet Stream here, because it will add 40% more movement speed, which is already very nice.

The increased projectile speed’s usefulness really depends on your equipped weapon and if you do find yourself using a primary or secondary weapon with slow projectile travel speed, the extra bonus does add up.

You do want to get some extra ability range here, to not only shield yourself, but also defense targets or allies within the range of your Turbulence radius.

Ability strength does nothing for this build, so you should ignore it completely and go for a lot of duration instead.

Adding Hunter Adrenaline does make sure that you’ll always have enough energy to recast your third skill as needed, but you could also use another survivability mod, some efficiency or even more range.

While ‘Turbulence’ does give you immunity to bullets, melee attacks, area-of-effect damage and status effects (e.g. knockdowns) do still affect Zephyr.

So make sure to look out for those and play accordingly.

While Zephyr does deal okay damage in lower level missions, you will see her weaknesses and problems as soon as you find higher level enemies.

The damage output is just way too low, the survivability isn’t the greatest and the high mobility isn’t useful in most missions.

So while the unique skill set of this Warframe does interesting on paper, sadly it just isn’t needed in Warframe right now.

That said, you still might want to try out the different builds, experiment with your own ideas and maybe find a solution on how to ‘break’ Zephyr into the current meta.

If you think you found a better build or if we missed important information, feel free to leave us a comment!