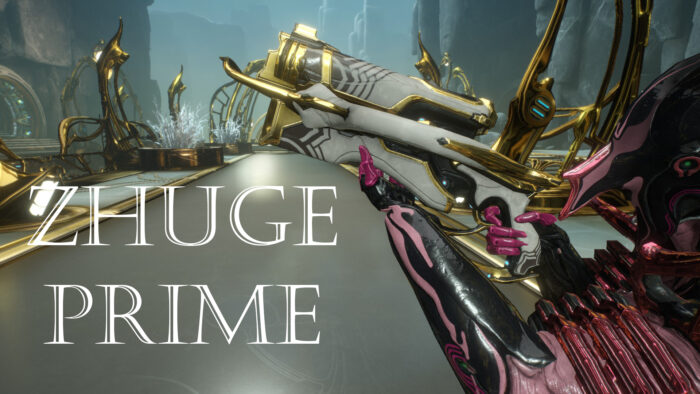 The Zhuge Prime is a great weapon and not only features a good fire rate, a very high base chance, great Slash damage and a good combination of critical damage and status chance.

But also falls under the category ‘bows’, which makes the weapon a nice pick for Sortie Missions with that requirement (‘Bows Only!’).

That also has the advantage that the primed version of the Zhuge get the benefits from fire rate mods like Speed Trigger, Shred or Vile Acceleration – which are granting double the normal amount of fire rate to bows.

Building the automatic crossbow feels somewhat easy, because the high status chance and the high critical chance do pressure you somewhat into a hybrid build.

But there are more great build ideas out there and we managed to find some ourselves.

So if you are looking for some ideas on how to build the Zhuge Prime, feel free to try out our ideas or use them as a direction and define them based on your personal preferences and your play style!

As a bow the Zhuge Prime could in theory use the Thunderbolt mod, which will add a chance to let your bolts explode to each shot you take.

In general that does sound pretty nice, but the Zhuge Prime already has this as an innate effect with a 100% chance – so equipping the Thunderbolt mod won’t do anything and is just a waste of a mod slot.

We also need to talk about the mod ‘Heavy Caliber’, which oftentimes is not as good of a choice as it might seem to be. But the Zhuge Prime does have a very good accuracy, so picking the damage boost here is with almost no disadvantage.

Even if you miss with a shot you will either hit with the next one or just kill mobs with the explosion of your bolt. So bringing in Heavy Caliber is always a great idea for your Zhuge Prime builds.

While we’re talking about your explosive bolts you should also know that there is a good chance you will eventually kill yourself if you aren’t looking out for that.

The self-damage might not be the reason, but rather the different status damage procs that will also hit your Warframe if you don’t stay away from the explosions.

Sadly you can’t use Cautious Shot on this weapon, so you really need to learn to watch out for self-damage: Make sure to put enough space between yourself and your enemies and don’t run exactly to the spots you just shot at.

This mod build will probably become your main build pretty fast, simply because it is super strong and very efficient.

The idea should be fairly easy to understand, because you combine a 90%+ status chance (thanks to two 60% status chance mods) with a good critical damage and critical chance (Point Strike and Vital Sense).

Split Chamber, Heavy Caliber and Serration are super great as well and are the basic mod you really want to use in all of your Zhuge Prime builds.

Vigilante Armaments is the weakest link here and to be honest it is not super clear if you shouldn’t play something else instead.

Primed Fast Hands would be the next choice here to counteract the slowish reload speed that will eventually be annoying during your missions.

Primed Cryo Rounds is also a great pick to increase your damage output even further and if you plan to fight the Infested you might even consider Fanged Fusillade for extra Slash damage.

You could also think about Vile Acceleration to get +180% more fire rate and mow down enemies in no-time!

The name should already give away what the goal of this build is: You’re using Thermite Rounds, Rime Rounds, High Voltage and Malignant Force to push the Zhuge Prime to 100% status chance and therefor have a guaranteed status proc with every shot.

You don’t need to go for Blast and Corrosive and can pick whatever combination you like most, but especially the Blast damage is great for some extra crowd control.

Just make sure to dodge the explosions or you will down yourself accidentally.

The weakest mod here is Primed Fast Hands and as explained above you have a wide range of mods you can try out instead: Vigilante Armaments or an extra elemental damage mod are great picks.

More fire rate is always nice and some extra Slash damage would also be totally fine. Feel free to experiment around and find the setup you like the most.

Building around the Hunter Munitions mod can be super strong, especially against higher level enemies.

While you don’t easily reach 100% critical chance with the Zhuge Prime you can and will get a lot of Slash damage procs with this builds. Critical Delay adds another 12,5% chance to your overall chance, so picking it feels pretty beneficial, but the disadvantage of the lower fire rate is pretty hard on bow weapons.

So you really want to counteract that with a fire rate mod like Vile Acceleration.

This build doesn’t leave a lot of room for improvements, because you do need to pick Hunter Munitions with a fire rate mod, the three critical damage mods (Point Strike, Vital Sense and Critical Delay) and the standard mods (Serration, Split Chamber and Heavy Caliber), which doesn’t leave you any room to try out different stuff.

If you don’t want to add the package of Critical Delay + Vile Acceleration, feel free to try out Bladed Rounds + Argon Scope, with the latter being especially strong with Hunter Munitions.

The Zhuge Prime is a very strong bow weapon that can easily carry you through the late game and kill high level enemies – as long as you have the right mods.

You really need to learn how to play around your bolt explosions or otherwise you will eventually proc your damage types on your Warframe and kill yourself.

So make sure to no rush into enemies you just shot at. Otherwise the weapon is pretty easy to master and feels very strong in every mission and against every fraction.

If you think you’ve found a better or just different build, make sure to leave us a comment and share your ideas with us!