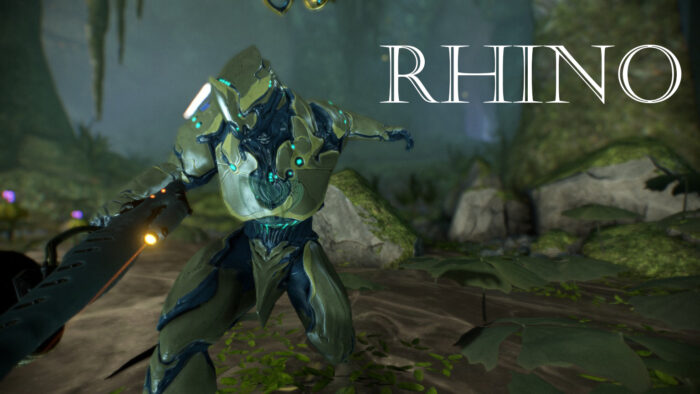 As part of the original crew, Rhino was released during the open beta of the game and Rhino Prime was released in March 2014.

He is a very good tank, can buff himself and his allies and he is also able to deal a lot of damage or use crowd control, which makes him the most versatile Warframe beginners can get early on.

This diversity also means that there are a lot of different (and viable!) builds – and you find them all here at this guide!

If you are however looking for a guide on how to get your hands on Rhino and his component blueprints then start reading our guide on that!

Choosing the right aura for your Rhino isn’t that easy and obvious.

Well, it is – you should always try to get Corrosive Projection, because it will help yourself and your team in killing everything faster.

But there is an argument to be made about picking one of the other auras: If you don’t want to invest Forma into your Rhino, going with one of the Madurai auras (Steel Charge, Rifle Amp, Dead Eye, etc.) might be still okay as long as you use a relevant weapon.

Picking Rejuvenation might also be right if you see yourself having problems with your health pool during the early game.

And the same logic applies to Energy Siphon – if you really need the energy and you aren’t going to use Rhino as a specialized farmer, go ahead and pick that aura.

It might even be usable in one of the following builds.

A quick word about all the augmented mods: They aren’t worth it and you shouldn’t use them unless you want to try out a super casual build.

Tip: If you want to know more about Rhino and his abilities, feel free to take a look at the wikia page!

Your second ability Iron Skin not only gives you an additional health shield, but it also buffs your Warframe armor.

Equipping Rhino with a lot of armor mods and ability strength is the key to the best possible build.

There isn’t really much to explain since it is pretty straight forward: Just press your 2 on the keyboard and from time to time take a look at the bottom right to find out what percentage of your ability is still up.

If it gets to lower numbers make sure to be ready to activate Iron Skin again. Sadly, you can’t reactivate your ability unless it is completely down, so keep that in mind.

Also, you don’t really need Primed Flow or Vitality and can switch them for mods like Rush, Equilibrium, Redirection or anything else you like to use.

This build is super strong in every mission type where you need to or want to use a tank. Especially in credit farm missions on The Index this build is essential and will make sure that you can safely farm points.

But its also fine in every other mission type, just make sure to equip a good weapon of your choice.

This build is mostly used in very specific farming groups and has one sole purpose: To give your dedicated DPS ally a higher damage output.

Your Roar ability will amplify everybody’s damage output for a short amount of time as long as they are in range during your roar.

Getting some ability range is recommended exactly for that reason. But you mainly want to stack strength and duration in order to be as effective as possible.

When casting your roar you just need to stand beside your DPS team mate and make sure to recast it once the duration ran out.

This build is also a nice place to start if you want to go for an Crowd Control option with your ultimate ability Rhino Stomp.

Just add Overextended for Intensify or Blind Rage and you are good to go!

Going for DPS with Rhino isn’t that great, because compared to other Warframes, his damage output is somewhat low.

But if you just want to kill stuff on low level (Lith, Meso, etc.), this build is still viable. Just get a good amount of range, some ability strength and efficiency as well.

Fleeting Expertise and Transient Fortitude are important here, because reducing the duration will make sure that the mobs affected by your stomp are reset again.

If you have a high amount of duration, recasting your ultimate ability would reduce your damage output by quite a bit, since there is a second burst to your Rhino Stomp that only affects enemies that aren’t in stasis (a.k.a. in the air due to your ability).

If you want more ability strength you can try to switch Cunning Drift for Power Drift or put in Intensify for Streamline. Also feel free to check our Rhino Prime build videos below.

Rhino is a very important Warframe for dedicated groups: Credit farm, XP farm, relic farm and a lot of other groups abuse his powers and profit from his different builds.

He is also one of the first Warframes you can farm in the game and since his abilities are really good for beginners as well, which is why he is so popular.

If you don’t have all the mods to complete the builds presented here, just make sure to follow the general guideline and work from there on out.