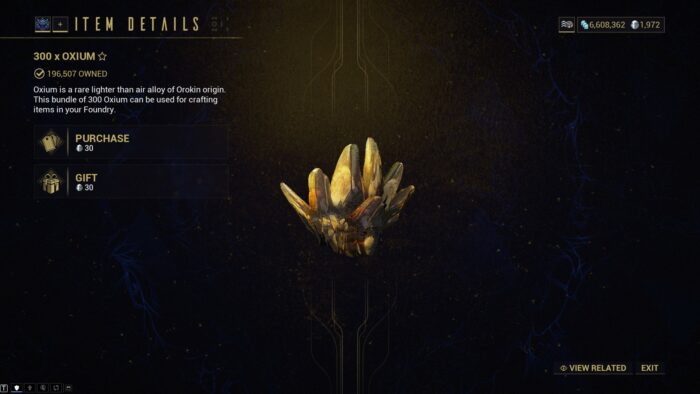 Even though Oxium is only an uncommon resource it usually feels like you never have enough of that stuff, especially during the early and mid game.

You will eventually need a lot of it (the primed version of Vauban alone needs 7.000 Oxium), so unless you are ignoring Oxium-based weapons and Warframes for a long time you eventually need to farm for the resource.

But why is it so hard to find a lot Oxium and why do you seem to always be out of the uncommon drop?

The answer is simple: The main source for Oxium are Oxium Ospreys, a Corpus unit that has the habit of exploding on its own if you are too slow in killing it, which will result in no resource drop.

If you manage to kill it in time however, there is a guaranteed Oxium drop. Sadly, no matter if you kill it in time or not, the Oxium Osprey robotic body will explode, leaving nothing to desecrate with your Nekros Warframe – unless the unit was killed by elemental damage, because there is a chance they are not exploding.

So Ember (‘World on Fire’) or weapons like the Ignis Wraith are great partner if you plan on farming with a Nekros. If you are looking for more tips and tricks or simply for the best map to farm Oxium, keep on reading, because you’ve found the right guide!

The best planets and nodes to farm Oxium

Since the Oxium Osprey is a Corpus unit, theoretically you should be able to jump into any (endless) Corpus mission and get a decent amount of the uncommon resource without any trouble.

But as mentioned above, sometimes you really need to get hundreds or even thousands of Oxium, so you want to find the best spot possible. Here are our picks:

Since the remake of Jupiter, Io does have a really nice spawning rate with a good density of enemies. If you manage to stay 20+ waves you should get a nice amount of Oxium, especially if you have a Khora/Nekros and a Speed Nova in your group.

The enemy’s levels are also low enough to nuke everything in just a few seconds, so you should be able to kill waves really fast.

Jupiter missions also have the addition of Amalgam units, which do drop the Hexenon resource, so you can double up on the resources you will eventually need.

This is probably the best spot to farm for Oxium, but it comes with a few challenges. Namely the potential Ambulas spawn can be a serious problem for lower level players.

You also have to fight Bursas at the end of every rotation (so every five rounds), which can be quit strong. If you don’t have any trouble fighting those enemies, you will get a lot of Oxium here.

If you find yourself a good team, going into excavation missions with Corpus units is also a good strategy to gain a good amount of Oxium.

You do need however to get some extra protection (preferably a Frost Warframe) for the excavators.

Find the highest level mission you can do and you should be able to farm for Oxium as well as for some nice excavation rewards.

A lot of resource farming groups are heading into survival missions. While that isn’t a bad idea, these missions have a somewhat big RNG element, simply because you need to find a good camping spot and also have a good spawning rate.

Sometimes enemies get stuck a few rooms away, sometimes the spawning rate is really bad and sometimes you can’t find a good spot to camp.

We really do advice to do the defense missions instead, but if you like survival more, make sure to restart the mission if you can’t get a good spot or spawning rate.

The best equipment for the job

As mentioned before, Oxium Ospreys often explode (even if you kill them in time), leaving no body behind for Nekros to desecrate.

Even if you bring a pure elemental damage weapon (like the Atomos) or a partner up with elemental damage based Warframes (like a Saryn), there is no guarantee that the Oxium Osprey won’t explode at its death.

So while you will increase the chance for a non-explosive death (and therefor for a body to be desecrated), bringing a Nekros to your Oxium farming group doesn’t seem like the best approach.

A way better solution to that is a Pilfering Khora, using the augmented mod Pilfering Strangledome with a good build.

Even though the proc chance for double loot is ‘only’ 65%, you will gain a lot of extra Oxium – especially on defense or survival missions.

You could also try and bring a Pilfering Hydroid, but playing with Hydroid is a little bit harder to do, even though Pilfering Swarm grants a 100% increased drop rate.

Because even though you will gain double Oxium on every Oxium Osprey you catch with your tentacles, you need to recast your ability all the time, which is hard on your energy unless you bring a Trinity as a group member.

Even then you will eventually miss a lot of the flying Corpus units, so we really recommend Khora over Hydroid. But try out both Warframes yourself and see which one suits your needs and personal play style the most.

There is a also a case to be made to bring Ivara to any farming mission, because her ‘Prowl’ ability will give you the chance to get another drop from the Oxium Osprey drop table before you kill them, potentially giving you a lot of extra Oxium.

This however is usually way slower than the other methods.

Even though killing Oxium Ospreys is by far the best method to get access to the uncommon resource, there are a few other ways you can obtain Oxium.

It might drop from any storage container, so while you are running through your missions, make sure to open any locker and destroy any crate you encounter on the map.

There is also a chance to get Oxium as a reward for doing Cetus (Plain of Eidolon) or Fortuna (Orb Vallis) bounties: Tier 1 missions can drop 100 Oxium, while Tier 2 missions reward 200 Oxium. You can also get 250 Oxium as a reward on the C-rotation of sealab sabotage cashes (on Uranus).

All these missions do have a very low chance, so farming them just for Oxium is a waste of your time, especially as there are way better missions available (see above).

But if you do want to farm for other drops as well (e.g. for Cetus/Fortuna standing, the newest relics or lenses), running a lot of bounties will yield some amount of Oxium while you also can potentially get whatever else you are looking for from those missions.

Getting enough Oxium throughout the game can be troublesome and very annoying. You will eventually have to grind for the uncommon resource, but that is part of the game.

The best way to get a lot is to follow our guide, make sure to have a Resource Booster going (to double the amount of Oxium you pick up) and make sure to switch to something else once you get bored or frustrated.

Revisit the Oxium farm later on and you will eventually get through the grind. Also, don’t forget to have fun while playing Warframe!

If you think we missed some important information or if you want to add some ideas, feel free to leave us a comment and share your knowledge with the world.